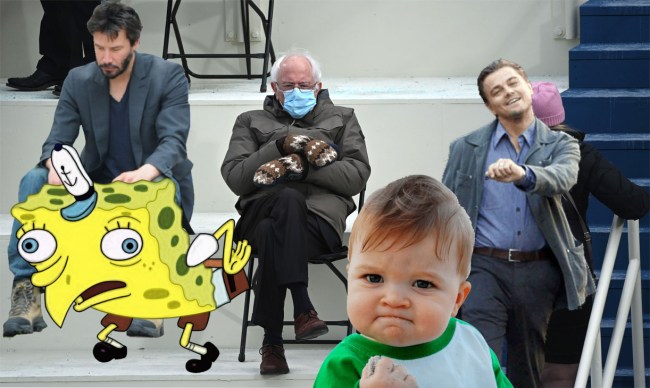 We are now about 48 hours removed from Vermont Senator Bernie Sanders becoming the greatest presidential inauguration meme in the history of the United States.

Yet there appears to be no sign of them slowing down anytime soon.

That’s a good thing. Because it takes our collective minds off all the crap we have had to deal with for the past several months (years?) and brings us together as a nation, united in our ability to create and laugh at Bernie’s inauguration attitude.

The Bernie Sanders inauguration meme has become so popular that it’s about to be turned into a bobblehead.

Political bobbleheads have been popular since 1960 when the first bobblehead of President John F. Kennedy was made. Now we're unveiling several new bobbleheads including an unexpected one featuring @BernieSanders from the inauguration. Pre-order now at https://t.co/KlAEygfVQZ. pic.twitter.com/up7biwA5V2

Bernie has also been turned into a Topps trading card.

He’s been thrust into video games.

And become a part of the Arrowverse.

And become a magical item in Dungeons & Dragons.

And finally, the Bernie Sanders inauguration meme has become a sweatshirt with 100 percent of proceeds going toward Meals on Wheels Vermont.

Made in the USA, Union printed. 100% of proceeds go to Meals on Wheels Vermont. https://t.co/Nv8Ng0K217 pic.twitter.com/yfXOsp3acX

You can still place orders, however, just know, “Due to overwhelming demand for this item, it will be 3-6 weeks until you receive your sweatshirt,” according to Bernie’s website.

Sadly, if you’re looking to score a pair of Bernie’s magical mittens, you can’t get them from the original creator Jen Ellis, but perhaps you’ll have some luck snagging a pair on Etsy from another crafter.

Thanks for all the interest in Bernie's mittens! It truly has been an amazing and historic day! I'm so flattered that Bernie wore them to the inauguration. Sadly, I have no more mittens for sale. There are a lot of great crafters on ETSY who make them. -Jen Ellis,

These are never going to get old.

ok fine I made one pic.twitter.com/HPpLU5P9Ad