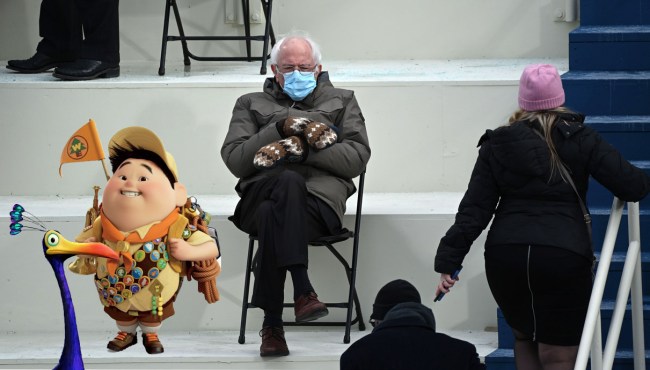 Joe Biden may have been sworn in as the 46th President of the United States on Wednesday, but it was two other guys who stole the show with their unusual appearances at the event: Alex Rodriguez and Bernie Sanders.

A-Rod drew a lot of attention merely for just being at the inauguration because it seems as if he is at every major event in the United States, like he’s the Forrest Gump of baseball.

Sanders, on the other hand, obviously had good reason to be at the inauguration. Not that it looked like he was enjoying himself.

Rocking a winter parka and some mittens, the Senator was arguably the least dressed up person there and his grumpy old man pose immediately sparked a flurry of memes on the internet.

The internet was quick with the Bernie memes 😭 pic.twitter.com/ymtP3YIOQA

waiting for my mom to finish shopping pic.twitter.com/RBIbfOhNGB

Everyone was getting in on the fun.

Sensing a golden opportunity, one of the internet’s funniest people, Ryan Reynolds, decided to jump on the Bernie meme bandwagon, perhaps signalling Sanders will be making an an appearance in Deadpool 3?

Turns out those mittens Bernie was wearing and drew so much attention were made by a schoolteacher from his home state of Vermont, Jen Ellis, using repurposed wool sweaters and recycled plastic bottles.

It also turns out that Sanders wasn’t the only who DGAF about looks and was dressed for the cold. Biden’s pick for Treasury Secretary Janet Yellen also chose practicality over fashion.

everyone is talking about Michelle Obama but turns out my fashion icon is Janet Yellen pic.twitter.com/10snrjcDpS

Also, if you’re looking to get in on the Bernie meme fun, someone actually created a website that allows you to put Bernie in any location you want in the world.

I made a website where you can put bernie in places using google maps street view. Enjoy!https://t.co/UfY5g9xU2k pic.twitter.com/8rstiEXOHf