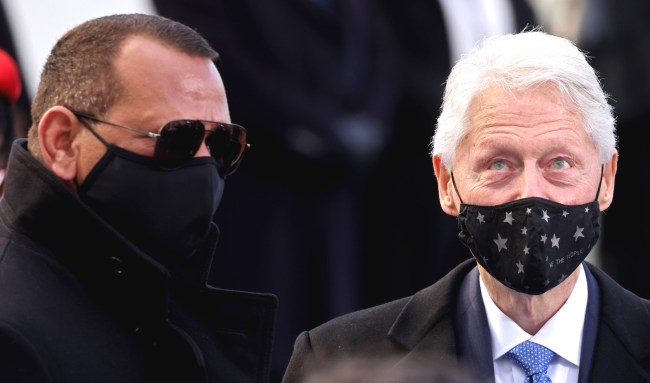 As anyone who watched knows, Jennifer Lopez performed a nice medley of This Land is Your Land and America the Beautiful as a part of new President Joe Biden’s inauguration.

As such, her current boyfriend and Trump advisor on the coronavirus pandemic Alex Rodriguez was also in attendance.

J-Lo couldn’t stop herself from throwing in “LET’S GET LOUD!” at the end of her ‘This Land Is Your Land’ medley
pic.twitter.com/4sqfPyjo7q

While there, Rodriguez got to rub elbows with former U.S. Presidents like Bill Clinton and Barack Obama.

A-Rod, who recently signed an extension to his ESPN contract to continue annoying baseball fans during Sunday Night Baseball broadcasts, surely provided some much needed support to Lopez who admitted being nervous before her performance.

“To think in the span of 12 months she’s done the Super Bowl, New Year’s, and now the inaugural. It’s unbelievable,” Rodriguez told Jimmy Fallon on Monday. “And what’s interesting is she’s most nervous about Washington, D.C., because of the responsibility, and she wants more than anything, like all of us, to bring people together, to inspire. And you know, music and sports does that better than anything.”

Then again, the internet came up with numerous alternative possible reasons for why Rodriguez might be on hand at Joe Biden’s inauguration.

why is A-Rod in the security detail pic.twitter.com/eFbsCrjEbR

Not me forgetting that A-Rod was at the Crossing of the Delaware.#Inauguration pic.twitter.com/TE7ajDI9yo

Never forget when A-Rod was at the signing of the Declaration of Independence. pic.twitter.com/ZRsZlN9N90

Never forget when A-Rod was at the Revolutionary War pic.twitter.com/hCVZ7G8kl9

at least once a year, i turn on a national event and a-rod will somehow just be there for some reason, fulfilling his destiny as baseball's forrest gump pic.twitter.com/ssio3aXXjT

A-rod hanging out at the inauguration hoping for a pardon for this pic.twitter.com/gBKl44dc6x

What value is there in A-Rod being at the inauguration? pic.twitter.com/I6L7pIgtpw

I can't wait until Jeter shows up out of nowhere to get a better seat than A-Rod.