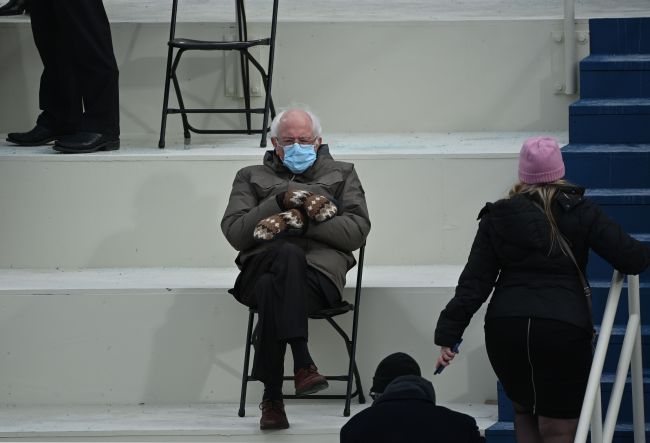 Have you ever met someone who straight up didn’t like Bernie Sanders? Not sure I have. Disagree with his policies and ideologies? Sure, that happens all the time. In fact, I’d imagine there are about 74 million people out there who don’t agree with his politics. But Bernie Sanders the man? He seems to draw nothing but respect. Even my most conservative friends usually “gotta hand it to Bernie” — the man is simply all business, all the time, and that’s a characteristic that transcends party lines. As far as I’m concerned, one of the great political tragedies of the last few years is the fact that we never got to see Bernie and former President Trump debate each other on national television. Honestly, could you imagine? Trump doing his weird hand thing, Bernie doing his weird finger thing, both guys just screamin’ at each other like they’re on the corner of 42nd Street in grimy pre-Dinkins New York City back in the 80s. If only. Alas, it wasn’t meant to be, leaving Bernie and Donald to merely throw barbs at each other through the media.

But while we may never get to see Bernie on the Presidential debate stage, we can promise he isn’t going anywhere anytime soon, as the man’s ubiquitous stubbornness essentially guarantees he’ll outlast most of his political rivals, as his ability to capture the attention of the public by *existing* remains unrivaled. Just look at the Inauguration, where he stole the show and became a massively viral meme for simply wearing a winter jacket and mittens.

And yet, despite how inherently Bernie that meme was and is, it pales in comparison to his response to the meme, which is arguably even *more Bernie* than the meme itself.

“It makes people aware that we make good mittens in Vermont. We have some good coats, as well,” Sanders surmised when asked about his Inauguration Day viral fame.

“We have some good coats, as well,” he adds.

And that’s just Bernie right there: forget about me, look at the mittens! Never change, Bern.