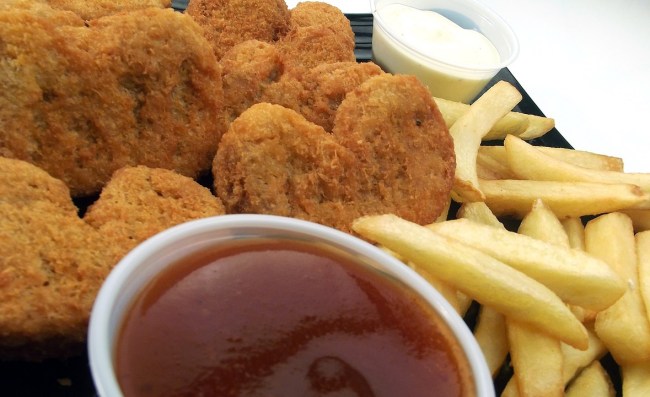 Being a dad is pretty great. I’m not going to get too into it but If you yourself are a dad, you probably understand.

If you’re not a dad, you either have an idea of what the gig is all about or would rather not hear about it. And that’s fine. I don’t really want to hear about your life either. Let me guess? You wake up when you want and go to more than two movies a year? Awesome. I’m happy for you even though my face does not suggest that.

There is one aspect of fatherhood that goes under the radar, however, and unless you’re a dad there’s a good chance you’re not hip to it. It’s not how fantastic it is the first time your kid grabs your finger or how marvelous it is when they finally sleep through the night. I think we already all know that those moments are super and life-changing.

No, one of the best parts about being a dad is enjoying the food you forgot about a long time ago that you now get to eat again because your kid is eating it. Once they start eating solid foods, dads become sneaky, opportunistic vultures hovering over their kid’s food, waiting to get their hands on some of it.

And it’s for good reason. Some of that stuff is delicious. Here you are, not having thought about some of these foods in years because you’re a grown up and you eat sushi and turkey burgers and salad now.

However, once you become a dad you quickly realize what you’ve been missing—especially these foods. 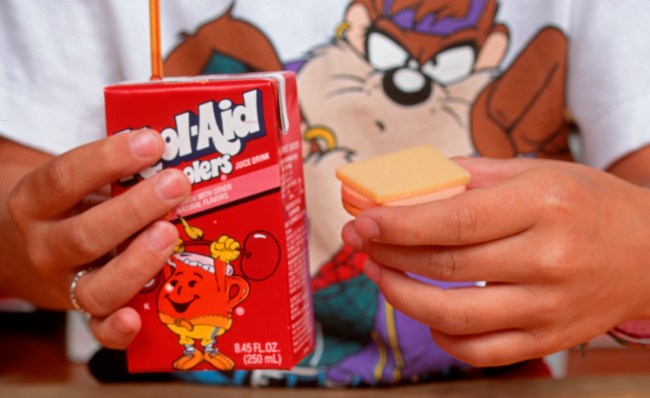 From an environmental standpoint, juice boxes might not be the best. But my dudes, I’m not a scientist. I’m a dad and, more specifically, I’m a dad who swipes juice boxes from my daughter when she’s not looking.

Don’t you dare judge me. You would do the same (if you haven’t already).

In the same way that Dr. Pepper tastes best when it’s in a can, somehow apple juice never tastes as good as it does when it’s in a box. The same goes for fruit punch. Maybe it’s magic. It’s hard to say.

I would like to make it clear that I’m talking about juice boxes and not juice pouches. Have you ever tried to get a straw in one of those things? There is a 47% chance you’re not going to be able to do it and your kid’s going to think less of you and it’s all going to go downhill from there.

Good luck getting them to listen to you when you can’t even put a straw in a hole. 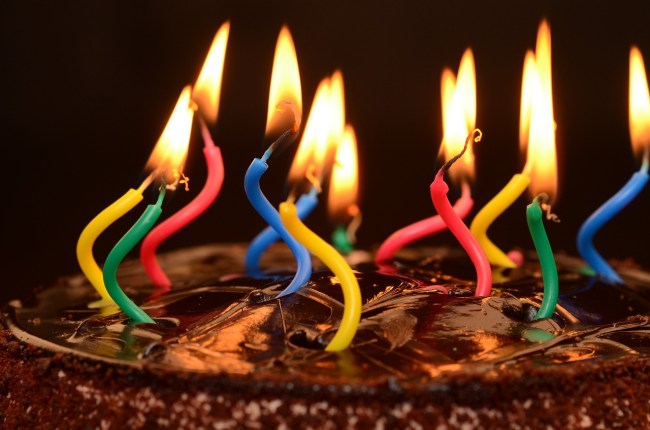 A few years before our daughter was born, my wife and I went to a friend’s birthday party. It was a very adult affair; it took place in the upstairs room of a bar and everything.

The birthday girl was (and maybe still is) a big a fan of cannolis and her husband nailed it, having gotten a “cake” that was a giant cannoli filled with mini cannolis. It was fantastic.

Yet as great as that “cake” was, it was just that: a “cake.” In the traditional sense, it wasn’t really a cake at all. A cake is frosting and maybe sprinkles and then the cake part, which is like, cake. From a purist standpoint, it was a bold move towards revolution and had to be treated as such.

As you get older and start hitting up occasions where cake is called for, the cakes get fancier and less traditional (i.e. the cannoli cake.) That’s not at all to say they become less delicious. They just become less of what you grew up thinking a cake was. This is why the cake you get at little kid’s birthday parties is so good.

It’s cake as God intended. It’s yellow. It’s vanilla. It’s chocolate. It’s wonderful and not healthy or organic or inspired from a design standpoint. The frosting is smeared on there indiscriminately, most likely topped with an image of Spider-Man, one of the pups from Paw Patrol, or a princess. The icing alone is worth the price of admission

Add some slightly melting vanilla or chocolate ice cream to the cake as it sits gingerly on a too-small paper plate and your weekend morning just got ten times better (which is good because if you’re eating cake it means you’re at a birthday party and those things always start earlier than you’d like). 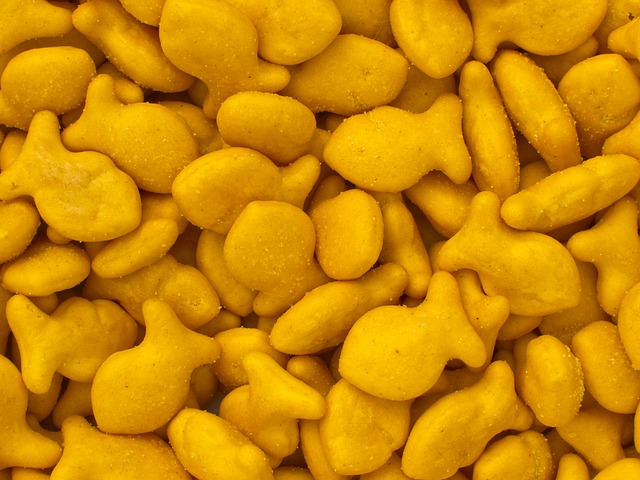 Let’s start with the one negative with Goldfish: they end up everywhere.

I don’t even know how they possibly end up in the places they do, but sure enough, they do. There are the more conventional spots like jacket pockets and at the bottom of bags and then there are more random places, like in the remote where batteries should go or inside your shoes. There’s no point in wondering how they got there. They just did.

They’re Goldfish. That’s what they do.

With that out of the way, there’s never a bad time for Goldfish, and if you’re offered them, there’s no way you’ll decline. Goldfish are one of those mystical foods that won’t make you full regardless of how many you eat. If you’re already full, you can still eat them and your belly will be fine as kind. I don’t understand it, I only know it’s true.

Goldfish are even kind of healthy now, which seems almost laughable. Of course, not all Goldfish are healthy; there’s no way the different colored ones are. But you can definitely get Goldfish made from wheat and I think there are even organic ones now.

It really makes you think about what a wonderful world we are living in. 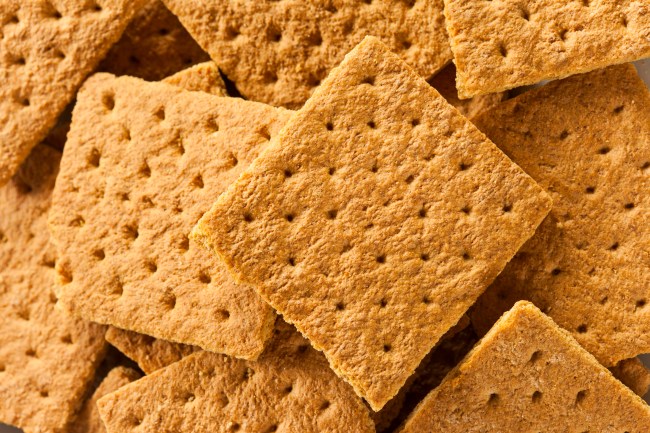 At some point in our lives, graham crackers become part of a team and lose their sense of individuality. They get swallowed up in the shadow of S’mores and this is a shame because it makes us forget how good graham crackers by their lonesome are.

You do have to deal with crumbs and crumbs are the worst but graham crackers make it worth it. They’re really good!

I would gladly sustain myself solely on graham crackers if need be. Like Goldfish, they’re not really that filling and you can kind of just keep eating them. This makes me sound low-key gluttonous, but it’s low-key true.

If you haven’t already, next time you’re nursing a little buzz after a night out and looking to get some food in you before calling it an evening, turn to graham crackers. Two and you’ll be good. Three and you’ll be super good.

This sounds like an ad for graham crackers. It’s not.

But it could be. 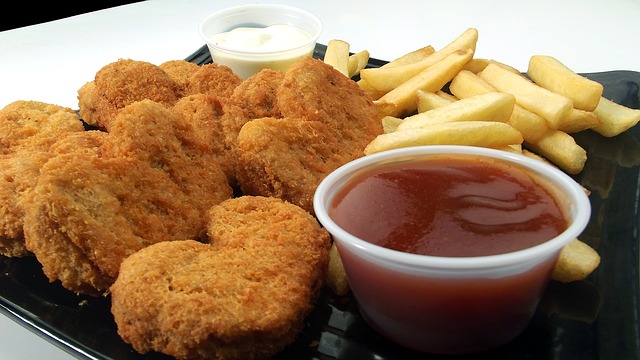 The easiest time to go out to eat with your son or daughter is probably when they’re really young, between five months and almost a year.

The reason for this is because if you time it correctly, they’re likely to sleep through the whole meal and you can have them on the floor in their car seat as you and your significant other enjoy your food without feeling bad about it (if anyone is going to try and judge you for eating out while your kid essentially sits on the floor, then they can go pound sand).

But as the years go on, going out to dinner with your kid(s) gets increasingly more challenging. They squirm, they want to run around, and they definitely don’t want to eat. Plus, as soon as you get to the restaurant, the meter is running and it’s only a matter of time before they lose it and you need to evacuate posthaste.

You know how whenever you’re out at a restaurant now and you see a family at a table near you and at least one—if not all— of their children, are glued to phones or an iPad? Yeah, there’s a damn good reason for that and if you’re not a parent now, you’ll learn eventually.

Once your kid(s) are able to start eating solid foods, you enter a new phase—the chicken nuggets (or fingers) phase—and what a glorious phase it is. Numerous scientific studies have routinely shown that little kids love chicken nuggets and really dig chicken fingers.

Sometimes they’ll throw you a curveball and say they want grilled cheese or pasta but we all know what they really want and, more importantly, we all know what we want: the deep-fried goodness they don’t eat.

I don’t know why, but at some point, it becomes slightly socially unacceptable for a grown man to order chicken nuggets or chicken fingers off of the kids menu. It’s madness. But when you have a kid you just have to wait a few years and then, just like that, you have yourself a workaround.

Like I said, being a dad is pretty great. 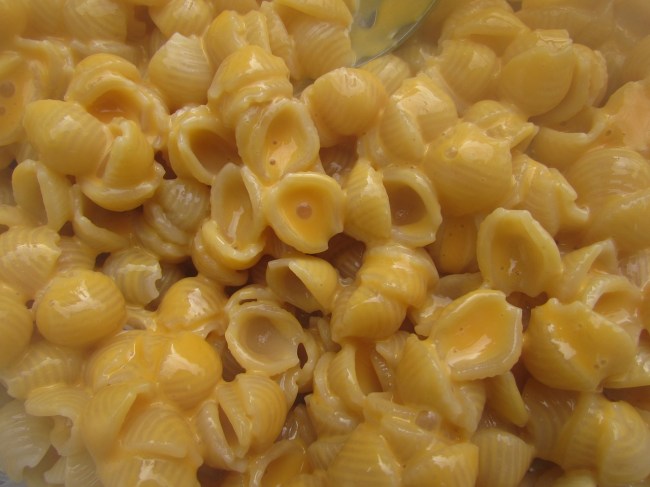 For the majority of us, mac & cheese enters and exits our lives at various (yet also specific) intervals.

It starts when you’re young and then runs through your teen years until you end up in college, where you can cook up some mac & cheese anywhere and anytime no matter what kind of “state” you might be in. Mac & cheese might make cameos at times after you graduate, but at some point, it gets phased out as you begin to step up your game from a culinary standpoint.

Then you have a kid. Everything is wonderful and your life will never be the same and you never have enough room on your phone because of all the pictures of your kid, who is adorable and definitely advanced (although you discuss that in private to keep them grounded).

Then, one day, they ask for mac & cheese for dinner because they saw their cousin or a kid at school eat it and GAME OVER! Mac & cheese is back in your life.

Have I mentioned that being a dad is pretty great?

Buddy, it’s so wonderfully gooey and the way it lounges about like an effin’ vagabond in your mouth is the stuff dreams are made of. It’s delicious right up until the moment it goes from lukewarm to a little bit cold, but that’s not a problem because you can toss it in the microwave for a few seconds and you’re good to go.

If you’re ever looking for me, there’s a good chance I’m in the kitchen shoveling the rest of my daughter’s mac & cheese into my mouth.

And if you’re wondering, I’m not the least bit ashamed about it but thanks for asking.