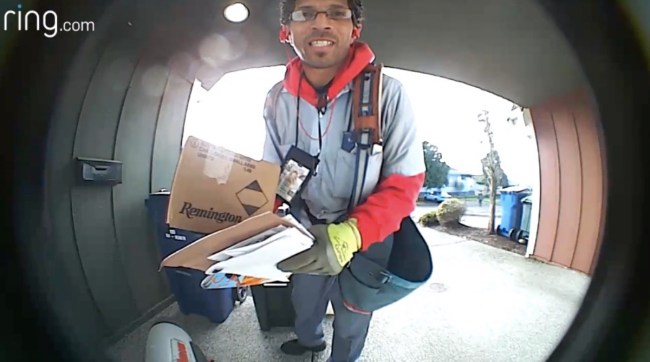 You couldn’t watch or read the news over the holidays without coming across a story about how there has been an epidemic of package thefts across America. People have been stealing packages left and right off of porches even when houses have smart doorbells like Ring which record the thieves.

It happened to a friend of mine in Las Vegas. He showed me the footage and the thief pulls down his hat and scrunches up his hoodie to obscure his face just outside of the camera frame before stealing a package.

The cops are pretty much powerless in these situations because it’s happening so frequently and they’re looking for a one-in-a-million suspect based on a grainy screenshot. The customer almost always gets screwed because they’re left to cover the cost of the lost item. It’s a totally fucked situation.

That’s why this USPS mailman deserves all the praise he’s getting on Reddit and various social networks. He has gone out of his way to ensure this package doesn’t get stolen off of the recipient’s porch. The Ring Smart Doorbell allows the customer (who isn’t home) to tell the postman they’re not there to receive the package but he can leave it. He then goes the extra mile.

If you haven’t yet watched this prank from a NASA engineer who was getting his shit stolen off the porch than you 100000% NEED to watch it NOW. I put off watching it for a week after it went viral but I was blown away by how good it was, and by how many people stole shit off this guy’s porch. It wasn’t just one thief it was like five separate people seeing packages on his porch and stealing it. He got the last laugh every time.

As for this guy’s policy of only leaving packages on porches when they’re from companies? I like it, but I’m not so sure companies like Amazon or Zappos would. The rationale here is that companies can just replace and/or refund whereas a package from Uncle Rick might contain items that aren’t replaceable. Great for the person receiving the packages, sure, but not so great for the companies getting stuck replacing stolen items.