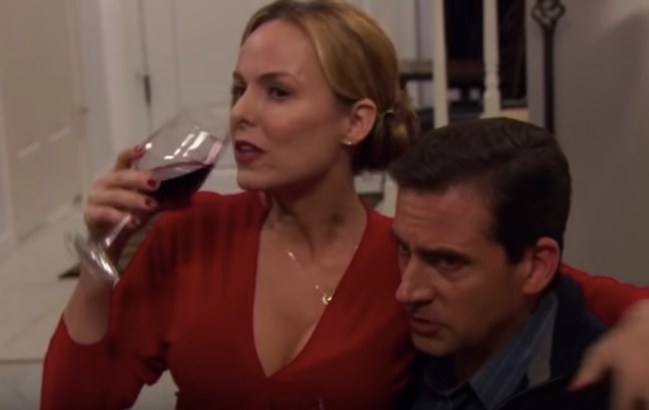 Michael Scott and Jan Levinson-Gould were one of the premier couples on NBC’s The Office. They first shacked up after a business meeting with Tim Meadows’ character named Christian in Season 2, Episode 7 The Client.

Jan was Michael’s boss and she always put off this steely vibe. Until they hooked up after that meeting you would’ve never in a million years have guessed that they’d get together. And while watching them kiss before scampering off to a hotel to knock boots you 100% knew that this was going to end poorly.

The relationship stretched out over a much longer period than any of us anticipated. They moved in together, Jan spent all of Michael’s money while making him sleep on a bench at the foot of their bed. He spent her free time making candles or banging her assistant named Hunter who later wrote a love ballad about her.

I’m by no means an expert on The Office but I’ve cycled through the seasons several times and without question, the most awkward episode for me was Season 04 Episode 13 Dinner Party where Michael and Jan have some people over to their condo for dinner. That entire episode makes my skin crawl and I think it’s the purest expression of the complete and total shit show that was Michael and Jan’s relationship. So it should come as no surprise that the video below heavily pays homage to that episode.

To pay homage to Michael and Jan’s train wreck, the official YouTube channel of NBC’s The Office put together this compilation detailing the ‘breast’ of Michael and Jan, as they put it.

This is like watching a car accident unfold in real-time and being unable to look away. It’s so good but also so hard to watch. I’m sure the German’s have a word for the way a video like this makes your skin crawl.

There’s always talk of a reboot when it comes to NBC’s The Office. I’ve heard ideas ranging from a full reboot with a completely new cast to bringing back just some of the cast members to potentially rolling out a holiday special of some sort.

Why not just give the people what they want and do a full feature-length film on Jan and Michael? I’d watch the shit out of a movie on just their relationship, wouldn’t you?

WATCH NEXT: John Krasinski Reveals His Favorite Episode Of ‘The Office’