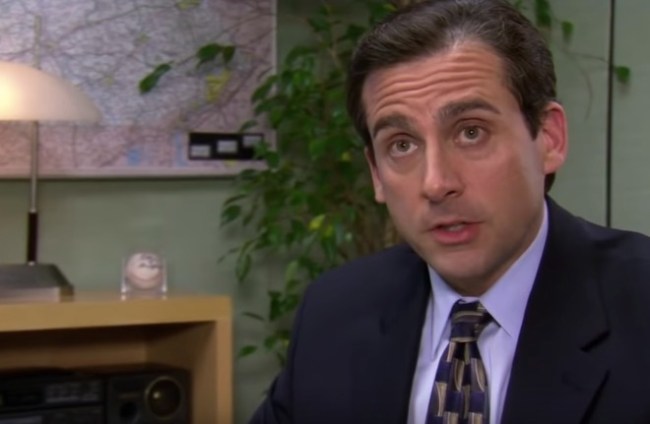 Michael Scott is one the best TV characters written in the past quarter century and we should all count ourselves fortunate that it was brought to life by the brilliance of Steve Carrell. It’s a genius-level comedic actor playing a certified wannabe genius that makes everything so perfect.

I guess it is worth noting up front that The Office is one of the most quotable TV shows around.

Tina Fey’s character in 30 Rock once said ‘Steve Carrell owns ‘that’s what she said” and this is a pretty interesting quote by itself because it’s layered. Steve Carrell didn’t come up with the phrase ‘that’s what she said’ but he shot it into the stratosphere and brought it to pop culture, just like Michael Scott tried to do with countless butchered quotes on The Office.

There are still rumors of a reboot or reunion of NBC’s The Office. Those kicked off months ago when John Krasinski (Jim Halpert) said he would ‘totally do‘ a reunion.

Those rumors picked up more steam when an NBC executive gave an interview in which light was shed on what a potential reboot of The Office would look like and what would need to happen in order for that reboot to come to fruition.

Since then, the rumor mill has fizzled out some. We don’t know for certain that a reboot of The Office is happening.

Thankfully for us, NBC’s YouTube channel for The Office remains active and they’ve just dropped this glorious video on us.

Here we get to see every single time Michael Scott misquoted something from ‘colored greens’ to ‘after birth’.

I’m a pretty big fan of The Office but if I had to rank my favorite comedies then NBC’s 30 Rock will always win out for me. Unfortunately, 30 Rock moved over to Hulu a few months back and I’m really not a fan of their UX. I find it clunky and several times a month their Roku app goes down.

So I’ve been revisiting old episodes of The Office and Parks and Rec lately to help me pass out at night and it has been spectacular.

If it’s been a few months (or years?) since you last cycled through the season of The Office then I’d highly suggest you follow suit and start throwing on a few episodes at the end of the night.

You can always skip the final season when Andy goes off the deep end and the show becomes borderline unwatchable.

Side note: from that era of NBC I never watched Community from start to finish and I’m about to give that a shot. So be prepared for lots of Community talk in the coming days.