John Krasinski Reveals His Favorite Episode Of ‘The Office’ 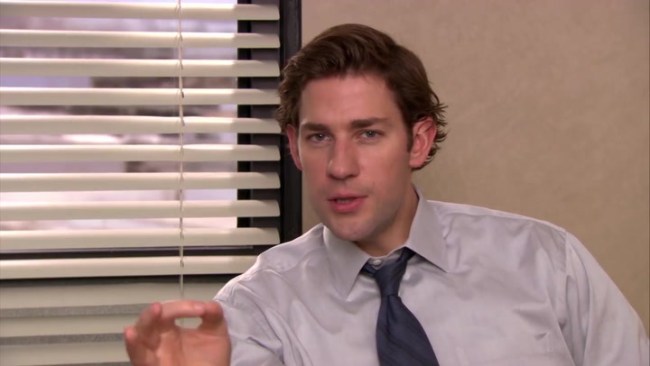 There have been so many fantastic episodes of The Office. “Booze Cruise.” “Casino Night.” “Dinner Party.” “Stress Relief.” “The Job.” “Golden Ticket.” But for John Krasinski, the man who played Jim Halpert on the hit NBC TV show for nine seasons, he has a definite favorite episode and it’s a classic.

Krasinski revealed that his favorite episode was the second episode of Season 1 titled “Diversity Day.”

“B.J. Novak wrote ‘Diversity Day,’” Krasinski told Stephen Colbert at a 92Y Talks last week. “I remember that day when [the diversity sensitivity counsellor played by Larry Wilmore] comes in and says, ‘My name is Mr. Brown,’ and Michael says, ‘I’m not gonna call you that.’ It was that moment combo’d with Kelly slapping him [for his impression of a bodega owner] where I said, ‘Oh my God, we’re a part of something totally unique — and I don’t think anyone will watch this. But I knew it was really good and I [remember thinking] we were a part of something special.”

RELATED: John Krasinski Tells Story How He Nearly Quit Acting Until His Mom’s Advice, Fights Colbert On ‘The Late Show’

The synopsis for “Diversity Day” from IMDB:

When Michael imitates a Chris Rock comedy routine, many people in the office are offended, prompting corporate to send in a sensitivity worker to give the Scranton office a diversity training day. When Michael is dissatisfied with the training, he creates his own diversity course (“Diversity Tomorrow”). Meanwhile, Jim loses one of his big commissions for the year

However, Krasinski also admitted that the pilot episode of The Office was kinda lazy.

“If I’m honest, I remember the pilot of The Office was word-for-word the British show at the time,” he said. “It made no sense to any of us because I think there are actually British jokes in there that don’t even apply [to Americans].”

Krasinski, who now stars in the Amazon show Tom Clancy’s Jack Ryan, added that the must-see docu-comedy “was amazing as a family and as a group and as a circus, and I’ll never forget it.” But it wasn’t until the American series’

What’s your favorite episode of The Office?

RELATED: John Krasinski Talks About Why He Wants A Reunion Of ‘The Office’ So He Can See What Jim’s Up To