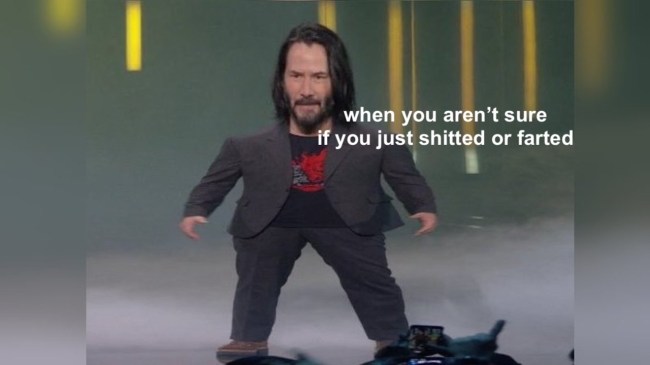 Remember a few years back — around 2014ish — when Matthew McConaughey seemingly rose for the ashes of a decade of doing rom-coms to go on a truly epic run of projects — such as Mud, Dallas Buyers Club, The Wolf of Wall Street, True Detective, and Interstellar — that forced his way back onto the A-List?

The McConaissance, you remember, right? I think it’s safe to say we’ve now entered a new age: the Keanuissance.

Keanu Reeves, who has quietly put together a three-decade-long acting career, is arguably in the midst of the most popular period of his 30-year-long career.

Whether it be his ass-kicking role of John Wick, his genuinely hilarious cameos in random Netflix movies, appearances in highly-anticipated video games, his philosopher-like musings, or his seemingly unmatchable respect for others, Keanu Reeves has entered that seemingly mythical level of popularity where his general presence is feverishly appreciated.

So, it should come as no surprise that he’s been turned into what’s shaping up to be the meme of June 2019.

Dubbed the “Mini Keanu Reeves”, a warped, funhouse mirror-like image of Keanu Reeves presenting Cyberpunk 2077 at this year’s E3 2019 Conference has been spreading like wildfire across all corners of the internet in recent days.

The #MiniKeanuReeves #meme is blowing up and we can’t get enough of it. Here are some favorites and the template so you can make your own. Feel free to tag us to be featured here on #BroBible!

It was only a matter of time that Reeves, who is essentially a walking meme in and of himself, got turned into a brain-melting internet joke.

And while the McConaissance petered out in just a couple of years (don’t get me wrong, I love me some McCon, but his last 7 or 8 movies have been utter trash), the Keanuissance currently shows no signs of slowing down, as he’s set to star in Toy Story 4 this summer followed by Bill & Ted Face the Music and the highly-anticipated John Wick 4 in 2021.

The more Keanu, the better.