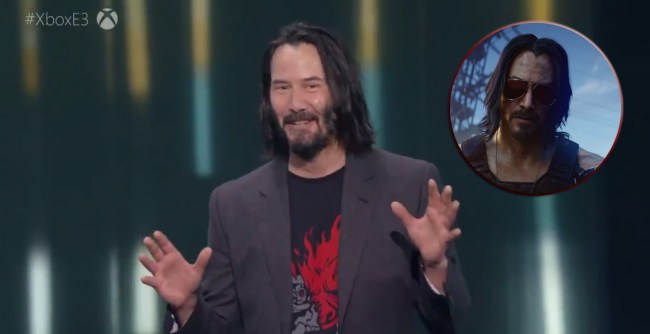 This year’s E3 video game industry convention hasn’t even officially begun (it starts on Tuesday), but no one who presents at this year’s event is going to top Microsoft’s Xbox announcement of its upcoming video game Cyberpunk 2077 starring… Keanu Reeves!

That’s right. Keanu Reeves not only made the presentation on Sunday, which was awesome, he is going to be “one of the key characters of Cyberpunk 2077,” according to an official press release.

During his presentation, Reeves appeared to be having an absolute blast talking about the game and playing franchise character, “legendary rockerboy” Johnny Silverhand, and the internet was very, very there for it.

“The trailer reveals one of the key characters of Cyberpunk 2077, Johnny Silverhand. The legendary rockerboy is played by Hollywood actor Keanu Reeves. In addition to his appearance and voice, Reeves is also providing full-body motion capture for the character,” reads the official press release.

In the most dangerous megacity of the future, the real you is not enough. Become V, a cyber-enhanced mercenary outlaw going after a one-of-a-kind implant — the key to immortality. Customize your cyberware and skillset, and explore a vast city of the future obsessed with power, glamour and body modification. The choices you make will determine the story and shape the world around you.

And did we mention Keanu Reeves is in it!

Keanu Reeves quietly coming up from behind to make 2019 his bitch is the kind of energy I need to get through the rest of this year. pic.twitter.com/mVWY3pODYT

Keanu Reeves just be showing up in stuff and making it like 100 times better. 😂😂😂😂🧐😎 pic.twitter.com/6rVYhzoPsU

I want to be his friend so bad

You can tell that he's a cool guy because he's Keanu Reeves.

Oh, and the guy who shouted “you’re breathtaking” at Keanu? Yeah, they’re giving him a Collector’s Edition of Cyberpunk 2077 worth $249.99.

And it got you a free #Cyberpunk2077 Collector’s Edition on top! Check your DMs.

Check out the full trailer below…