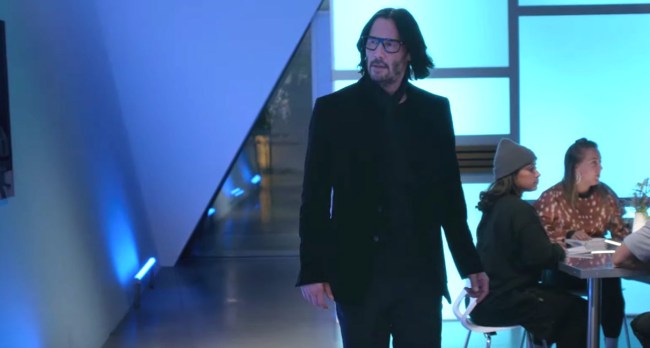 If there are two things I know for a fact the internet absolutely loves it’s Keanu Reeves and memes. Especially when the two of them are combined into one.

It’s really quite understandable. Keanu Reeves is one of the most awesome human beings most of us have ever seen, and memes are, well, memes. What’s not to love?

This month we have seen Reeves flexing his acting chops in not only the third John Wick movie, but he also makes an appearance in the new Netflix movie Always Be My Maybe starring Ali Wong and Randall Park.

The movie itself has gotten good reviews, but a Keanu Reeves fan account on Twitter only cares about one scene in particular from the film. And that would be when Reeves makes a grand entrance, in slow-motion, much to the surprise of Park’s character Marcus.

Something else that’s brilliant is that aforementioned Twitter account. It’s named “Keanu Reeves Walking to Music” and it’s exactly what it sounds like it would be. Get ready for your day to get much better.

Keanu Reeves walking to Tears For Fears? Got it.

everybody wants to rule the world – tears for fears pic.twitter.com/y62b2LNd5Z

Keanu Reeves walking to The Beach Boys? Why not?

The Cure? All over it.

You can basically put Keanu Reeves walking to any song and it would fit perfectly into any kind of movie. The man’s talent truly knows no bounds.