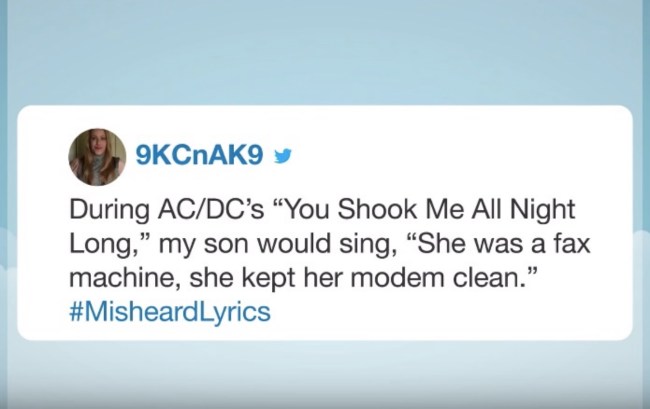 It’s not so much that I ever actually mishear the lyrics to a song it’s that I’m never really listening closely in the first place. I listen to 99% of music when I’m in the car or commuting and I’m doing a million other things.

With that said, I’m just as guilty as anyone alive with singing the wrong lyrics to songs. It’s nice to see that I’m not alone. Jimmy Fallon sent out a tweet a few days ago that said “I used to think it was “Rocket Man, burnin’ down his fort of traffic cones.” #MisheardLyrics” and everyone started responding to the tweet with misheard lyrics of their own.

Jimmy compiled the best of those tweets into a short clip last night on The Tonight Show Starring Jimmy Fallon and I’ll be honest, some of these are pretty inexcusable, but I’m trying to withhold judgment. Since I know that a lot of you would rather scroll through tweets than watch a video, I’ve included a bunch of the tweets below as well as some that he didn’t include in this clip.

my son sings "if you like cheese enchiladas, and getting caught in the rain" #MisheardLyrics

#misheardlyrics My 6-year old, Caleb, was singing the other night in the kitchen: "Put your hands up, they're playing my song, my underwear flies away."😂😂😂😂 #partyintheusa

My uncle thought it was “slow talking Walter, the fire engine guy” instead of smoke on the water #MisHeardLyrics

It’s a shame that anyone ever gets corrected. All of these people need to just be allowed to be themselves.

This song has plagued me forever. My first name’s Casspaul. ‘Rock the Casbah’ sounds eerily similar to Rock the Casspaul. People have been singing this shit to me forever.

I used to think it was "I'm here and I like it, rock the cat box." (Rockin' the Casbah) and I sang this to a boyfriend as an adult… #MisheardLyrics @FallonTonight

We’re all guilty of this one.

I STILL hear Manfred Mann's Earth Band singing "Blinded by the light, rolled up like a douche, and a rollin' in the night…" #MisHeardLyrics

#misheardlyrics And I'm here, to remind you
Of the mess you left when you went away
It's not fair, to deny me
The cross-eyed bear that you gave to me
You, you, you oughta know

@FallonTonight #misheardlyrics
Elton John's Benny and the Jets
"She's got electric boobs, her ma does too, you know I read it in a magazine "

They probably thought ‘You’re So Vain’ was also about them.

My name was Lisa Brown and I thought “All the leaves are Brown” from California Dreaming was “All the Lisa Browns”. It was so cool my name was a hit song! #MisheardLyrics

As a child I was sure the right lyrics was: "Who you gonna call? (Those bastards!)" #MisheardLyrics

I think we’ve got the winner here.