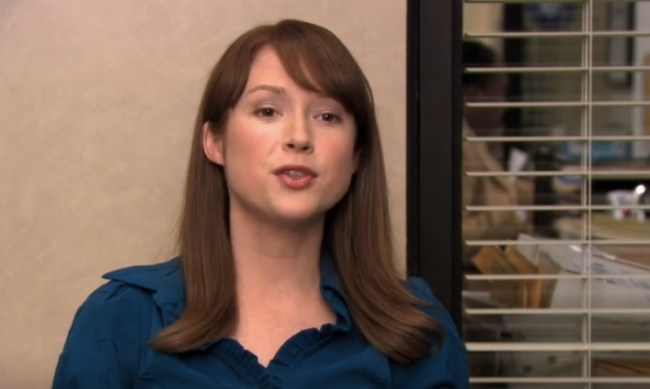 Ellie Kemper wasn’t an original member of NBC’s The Office cast but she was there until the end, and she deserves to be in the discussion of the Top 5 best characters throughout the series.

She first appeared in 2009 after the show had already been on the air since 2003 but quickly became a fan favorite thanks to her infectious screen presence. This is actually something that Ellie Kemper recognizes in herself, people see her and immediately like her, and it’s helped her in life immensely.

Honestly, it’s hard to see her face and hate her. She’s so damn likable.

Anyway, you could spend a 10,000-hours debating who the top three characters on The Office was. Expand that debate to the top 5 and it could go on for a lifetime. Michael, Dwight, Jim, Andy, Erin, Pam? Does pam get left out of the top 5? For me, she’s probably ahead of Jim because he became a tool in the later seasons while she blossomed. Everyone has their own opinions on this, I’m sure.

I’m here with this supercut from NBC’s The Office YouTube channel highlighting the very best Erin Hannon moments as proof that she deserves to be in the top 5 even though her presence on the show was only from 2009 to 2013.

If you’re a fan of The Office then I’m sure you binge watch the show regularly on Netflix and have your favorite episodes. It’s easy to get stuck in the same cycle of watching the same favorites over and over. This compilation of Erin’s best moments is a glorious walk down memory lane from some episodes I hadn’t revisited in a long time.

Looking for more of the very best moments from The Office? You can check out this supercut of the best of Michael and Jan’s relationship including the infamous ‘Dinner Party’ episode. Someone also recently put together this compilation which strings together 1-second from every episode of The Office ever.