It’s The Season Of Embarrassment: People Shared Their Worst ‘Homecoming FAILs’ On Twitter 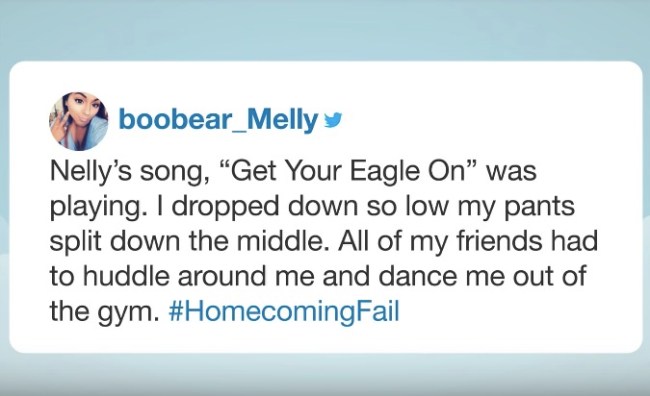 School dances were the worst. I know that everyone doesn’t feel this way. Some of you probably loved them. Me? I never found anything even remotely enjoyable about standing around in a dance circle and breaking it down to ‘The Thong Song’.

Maybe school dances coincided with the age where I hated fun, I don’t know. It’s not that Homecoming was awful. I actually won Homecoming Prince/King my Sophomore year and was the first non-football player to win at the school. Shout out to H.S. Crew/Rowing and Golf for keeping me away from CTE, right? Right.

Anyway, homecoming is prom’s lame ass cousin who comes in town once a year and ruins all the fun. There’s a 50/50 chance your team loses the game ahead of the dance. There’s a lame ass parade that’s not for the students as much as it’s for the geriatric alumni who want to ride around the track surrounding the football field in a Chevy Camaro and wave at people they don’t recognize.

The theme of the dance 100% sucks ass and you’re too young to have your own money yet or any real sense of fashion so you end up dressing like a complete jackass with a suit that doesn’t fit well and a poorly tied necktie. It’s just, not good. And that’s all before something embarrassing happens.

A few days ago, Jimmy Fallon sent out a tweet asking people to use the hashtag #HomecomingFAIL and share their most embarrassing homecoming moment. Some of the responses are fan-f*cking-tastic.

Since this was on The Tonight Show Starring Jimmy Fallon he compiled this into a short little clip (below) but I know a lot of you would rather scroll through tweets than watch a video. I know this because you’ve told me so in the past. So I’ve also included a bunch of the popular tweets below the video for you to scroll through, enjoy.

Here are some of the best tweets from the #HomecomingFail hashtag (also check me out on Twitter at @casspa).

My school discovered Asbestos the day of our homecoming dance so it was cancelled. We had shirts that said “Homecoming 2010, we did it asbestos we could”. #HomecomingFail

I asked a girl to homecoming by slipping a note into her locker. On the way back home I had to pick up my dad’s meds at a drugstore so I passed the prescription to the pharmacist and she said she felt flattered but she was married. I guess the notes got mixed up #HomecomingFail

I feel like I’ve heard of this happening to several people. How hard is it to *not* hit cars?

When I picked up my date, I pulled out of her driveway and backed into her brother's car parked in the street…#HomecomingFail

My freshman year homecoming I was so excited to dance. I danced like a mad man the whole night. Later I heard a rumor went around that I was wasted. I was 15 and never had a drink in my life. They called me Drunky McDancePants for the rest of the year #HomecomingFail

This dude was trying waaaayyyyy too hard for something with poor execution.

I was gonna ask a girl to homecoming by giving her a painting of planets I did in art class and saying it'd be "outta this world" if we went together. She told me my painting looked like a boob. #HomecomingFail

We went to the dance separately because we didn’t want to upset a mutual friend. Then proceeded to not dance with each other because of said friend. So basically I went alone but mentally had a date. #HomecomingFail

Claustrophobia or not, this sounds like a badass Homecoming location.

Space Needle. My date forgot to mention that he was both claustrophobic AND scared of heights. I figured it out somewhere between the hyperventilating and him shoving our tour guide out of the way once we reached the top to get out. #HomecomingFail

My bro used his newly acquired pilots license to fly over the homecoming game. He flew really low and people fled the stands! And he got arrested. But now he's a town legend!! #HomecomingFail

This has to happen at like 50% of all school dances.

In HS at the homecoming dance Nellys "Get Your Eagle On" was playing. I dropped down so low my pants split right down the middle 😂 my gfs had to huddle around to dance me out of there 😨😱😱#HomecomingFail

Lastly, this is 100% a Homecoming Win and in no way a fail. This is definitely a humble brag this girl snuck into a trending tweet.

My escort for Homecoming Court was the drum major for the marching band, so he had to keep leaving me alone on the car to go conduct when the band played. Our mascot, the Rowdy Rooster, was more than happy to take over for him whenever he left! #HomecomingFail pic.twitter.com/Yrf81OKtSF

Honestly, I cannot say that anything embarrassing ever happened to me at homecoming. I was just never a fan of school dances. The after parties were great but the dance itself always sucked ass. Maybe I just had bad luck with some boring ass dances.