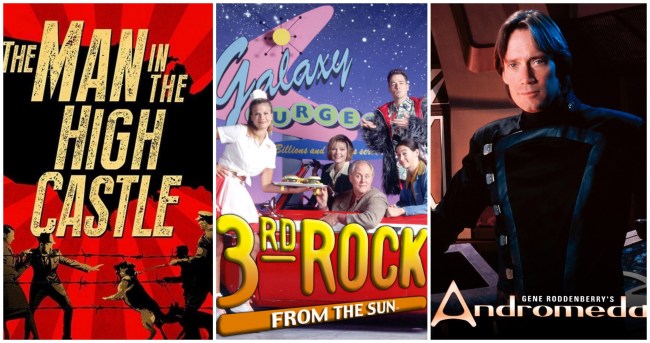 In April 1968, Stanley Kubrick reinvented and redefined the science fiction genre forever with the release of 2001: A Space Odyssey.

Fast forward 50 years, and science fiction continues to evolve on the big screen but with many directors and visionaries still implementing Kubrick’s techniques and themes — an undying influence on the category forever associated with him.

While Kubrick’s tentacles can be felt in 2018 sci fi fair, what has changed for artists who want to dabble in the subconsciousness — or explore other dimensions, or alternative histories — is the platform of television has welcomed them with open arms. And, an open canvas to build their new worlds and visions.

Here are 15 science fiction shows that stand out as streaming options on Amazon Prime:

1. The Man in the High Castle

A Prime original based on Philip K. Dick’s award-winning novel, this series explores what it would be like if the Allied Powers had lost World War II and the Nazis went on to rule the planet. Made up of a cast of relatively unknown stars, this (alternative) historical drama has netted two Emmy awards already for Amazon. It returns with a season 3 premiere in October 2018. There’s never going to be a better time to catch up.

Five seasons in, and Orphan Black remains one of the best — and most popular — shows on television.

The series begins with Sarah (played by the outstanding Tatiana Maslany) witnessing the suicide of a girl who looks just like her. From there, it spins into a science fiction masterpiece for the ages.

Can someone say binge watch? Most of us saw an episode (or seven) of this series in our high school film class, but few of us have gone back to the beginning and watched all 156 episodes. They’re all available now on Amazon. And when we say the beginning, we mean to 1959. You’ve been warned.

Philip K. Dick’s success in the aforementioned The Man in the High Castle was enough to earn Electric Dreams a green-light last year and a January 2018 premiere date. This anthology series is a must watch for anyone who likes contained storytelling arcs and guest stars. The series has had no shortage of Hollywood familiar faces stopping in for an individual episode. They include: Steve Buscemi, Bryan Cranston, and Janelle Monåe.

This Syfy drama is set to return with its fourth season in 2019. For now, the first 36 episodes of this  asteroid belt-set drama are available to stream on Prime. In case you were wondering, yes, it’s a high-wire act to set a story on an asteroid belt. Thankfully, creators Mark Fergus and Hawk Ostby know how to dream big. The Expanse arguably has the best visuals on TV for a show not named Game of Thrones.

6. Third Rock From the Sun

A blast from the past — literally. This network comedy, in all of its 139-episode glory, is available to users whenever they want to dive in to shenanigans at the Solomon household. Emmy winner John Lithgow stars as Dr. Dick Solomon, but stick around for Jane Curtin and French Stewart’s standout performances. And yes, that’s Joseph Gordon Levitt playing their son, Tommy.

The lesson? Everybody has to start somewhere. For JGL, it was on a show about a group of aliens who are sent to Earth disguised as a human family.

Like many shows on this list — Third Rock and The Twilight Zone not included, Doctor Who is returning for a new season relatively soon in October 2018. Amazing for a show that rotates its lead each season and is about an alien adventurer who can change appearance and gender by regenerating when near death. You wouldn’t think that type of series would have such staying power, but it’s one of the 10 longest running shows on the air currently.

Must watch episode: A Man Goes to War.

Edward James Olmos has had quite a career. From playing Harrison Ford’s partner Gaff in the science fiction masterpiece Blade Runner to tough teacher Jaime Escalante in Stand and Deliver, he’s stolen scenes both big and small. He’s received an Oscar nod, and hundreds of other accolades. Yet, when it’s all said and done his most towering achievement might be carrying the 21st Century’s definitive science fiction series for 73 episodes, across six years. Admiral William Adama is a character Olmos was born to play.

It came and went in 39 episodes but this small-town drama about a mysterious force field that trapped its residents inside and cut them off from the rest of civilization did spark a lot of discussion when it started in 2013. TV was still looking to replace Lost, and this was CBS’ attempt. It didn’t totally work out. But the good news is five years later, it makes for a relatively short, and easy, binge watch. One a day for a month and a week and you’re all set.

10. Star Trek: The Next Generation

Keeping the Trekkies on their heels was too easy. Alas, of course, Star Trek: The Next Generation makes this list. Set decades after Captain Kirk’s five-year mission, Patrick Stewart takes on the role of Capt. Jean-Luc Picard — a career-defining turn for the knighted actor. You can’t debate 176 episodes over eight years. The man lived and breathed life as Picard, and breathed life into an entirely new generation of Star Trek fans. Mission accomplished.

A Prime original series due back in early 2019, The Tick successfully blends comedy and science fiction together — a recipe that creative chefs have been trying, unsuccessfully, to concoct for decades ever since Mel Brooks debuted Spaceballs. A few years ago, Guardians of the Galaxy proved Brooks’ slapstick comedy wasn’t a flash in the pan. The genre-bending blockbuster set the stage for Peter Serafinowicz‘ title character.

Similar to Electric Dreams, this anthology series is very contained in its episodic storytelling and characters. Shifting settings and timelines from episode to episode, The Back Pages ran for seven short, web-based installments last year. A second season hasn’t been announced.

Similar to Under the Dome, this series was short lived in 2007. One could make the argument it was just slightly before its time — six years before Agents of SHIELD came out and set the playground for superheroes in TV shows. A year after that, in 2014, The Flash (not available on Prime) premiered and has been on ever since. Season 5 makes its debut in October.

Balancing family life with solving mysteries can be challenging, but Allison DuBois (Patricia Arquette) made it look easy for seven season on this NBC sci-fi drama about a suburban mom who receives visions from the dead that help her solve crimes. Amazon has all 130 episodes for those who are ready to cross over.

Most people know Kevin Sorbo for Hercules but he had staying power in living rooms across the country until 2005 when this 110-episode series about the Starship Andromeda called it quits after five seasons. Along for the ride, Sorbo’s Captain Dylan Hunt is at the front line of all the action, unsurprisingly, as the ship looks to rebuild a fallen civilization in space. It’s never easy for Hercules.