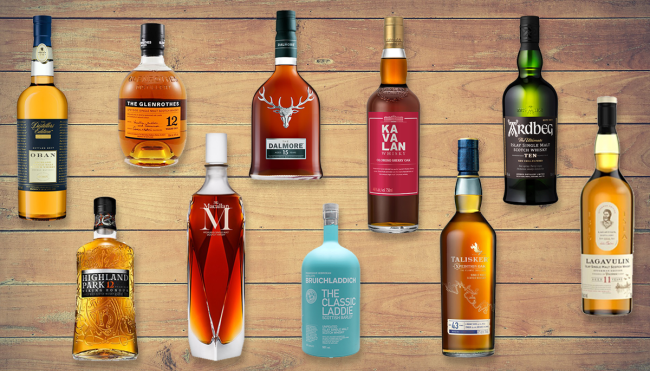 Being a whiskey fan in this day and age is sort of a Tale of Two Cities scenario; it’s the best of times when you consider the plethora of options on the market, but the popularity of the spirit has also made it the worst of times for the typical drinker’s bank account balance.

Certain whiskey categories have been impacted by the recent boom more than others. As a big bourbon guy, I’ve been dismayed to watch the retail price of my favorite bottles gradually rise in recent years as some of the most sought-after labels sell for truly absurd prices on the secondary market. As a result, I’ve made a conscious effort to expand my horizons, and if you’re looking to branch out, now is the perfect time to get a bit more acquainted with Scotch.

The world of Scotch whisky (yes, there’s a reason there’s no “e”) can be a fairly intimidating realm to venture into when you consider the region where it’s produced is home to scores of distilleries that have spent centuries mastering their craft. However, it doesn’t have to be that way.

Whether you’re looking to wade into the waters for the first time or cannonball straight into the deep end, I’ve compiled a list of the best bottles of Scotch you can add to your whiskey collection today.

What Are The Best Scotch Whiskys You Can Buy Right Now?

There’s no better way to ease into things than by embarking on a virtual tour of Scotland and highlighting the five officially recognized categories of Scotch, which are defined by the unique characteristics traditionally associated with the regions where they’re produced.

Our first stop on our journey is Speyside, which derives its name from the River Spey. This region is home to more distilleries than any of the others—including some heavy hitters that perfectly highlight a style that eschews an overly peaty profile in favor of a lighter, fruitier essence.

As is the case with many Speyside distilleries, Glenfiddich harnesses the power of Spanish sherry casks in addition to American bourbon barrels to impart a subtle sweetness to supplement the pear notes that take center stage.

I’m not entirely sure why so many Speyside producers throw “The” in front of their name like they’re Ohio State, but if any of them have earned the right to do so, it’s The Glenlivet. This 18-year offering is elevated by the European oak casks that inject a bit of spice into the final product without overpowering the tropical flavors it’s known for.

The “DoubleWood” here refers to the two aging stages this Scotch undergoes. It starts its 12-year life cycle in traditional oak that mellows out the spirit before upgrading to an Oloroso sherry cask that makes the cinnamon and nuttiness that define it a bit more robust.

If you’re looking for an incredibly well-rounded Scotch whisky, The Glenthroes has you covered with this single malt that’ll treat you to a mix of vanilla, melon, banana, and a bit of cinnamon to tie it all together.

We’re now going to travel south for a brief visit to The Lowlands, where the malt used to produce the Scotch is typically given a light roast to produce a comparatively smooth and easy sipper.

Auchentoshan distills its base spirit three times before barreling it, and over the course of its 12 years in the cask, it’s imparted with toasted almonds and notes of toffee that serve as an incredibly formidable duo.

Glenkinchie pays tribute to Edgar Allen Poe by aging this Scotch in Amontillado sherry casks. However, the malt is really the star here, and it boasts a distinctly oaky essence along with a bit of pepper at the end.

It’s only natural that we depart The Lowlands for The Highlands. It’s the biggest whisky region Scotland has to offer, and while the distilleries that call it home aren’t really united by an overarching ethos, they do share one trait in common: the ability to make some damn good Scotch.

Highland Park sets itself apart by using peat harvested from the Orkney islands to roast the malt for this Scotch, which showcases the smoky flavor you’d expect alongside tangerine and peach notes all tied together by a fantastic creaminess.

The only thing better than the bottles The Dalmore uses is the Scotch that’s inside them. This 15-year is a criminally smooth whisky featuring a delightful combination of honey and vanilla on the tongue and is one of my personal favorites.

At the risk of offending the loyalist of the Campbeltown region, the bottles that are produced there are fairly hard to come across when you consider it’s currently only home to three fairly small distilleries. As a result, I’m going to skip that leg of the trip and cap off this Scotch tour with a visit to Islay, which is known for producing spirits with a flavor profile best described as “getting punched in the face by a flaming peat bog.”

Arberg’s entry-level Scotch doesn’t pull the aforementioned punch, and if you’re feeling fancy, I highly recommend seeing how it measures up to some of their other offerings.

Ron Swanson’s Scotch of choice might be the best “bang for your buck” bottle Islay has to offer (if you’re looking for a bit of a twist, be sure to check out Lagavulin’s recent collaboration with Nick Offerman that added some Guinness barrels into the mix).

In addition to being a very solid whisky, Bunnahabhain is arguably the best bottle you can buy if you’re in the mood to play my favorite Scotch drinking game: seeing how many times in a row you can say the name of the distillery without messing up after you finish each dram over the course of the night.

If you’re not a fan of peat but still want to get your Islay on, Bruichladdich’s The Classic Laddie is your best bet, as this unpeated Scotch more than holds its own against its smokier counterparts with the help of honey and green apple notes.

The Best Scotch Whiskey For Treating Yourself (Or Someone Else)

While none of the Scotch whiskey I’ve mentioned so far could really be classified as “cheap,” they’re basically bargain bin compared to bottles that fall into the “If You Have To Ask, You Can’t Afford It” category. With that said, if you can afford these, you’re not going to be disappointed.

The only real downside to The Dalmore’s 25-year Scotch is that it’ll probably ruin all of its younger offerings once you try it.

Yes, you read that right. This is a 43-year-old Scotch that was recently unleashed by an unsuspecting world by Talisker, which aged the whisky inside casks containing staves that were exposed to the elements while making their way across the Atlantic Ocean.

Part of the reason you’re going to shell out a solid chunk of dough for The Macallan M is the Lalique crystal bottle it comes in. However, the Scotch inside is still the main attraction here; a dark liquid aged in Spanish sherry casks featuring an impeccable balance of fruit, oak, and smokiness (and the price tag to match).

Distilleries have to meet a number of criteria in order to legally label their product as “Scotch,” and “being produced in Scotland” is probably the most notable barrier to entry. With that said, there are plenty of brands out there pumping out some fantastic whiskey that can’t technically be called “Scotch” but still checks basically all of the requisite boxes.

Teeling is one of the rare whiskeys made in Ireland that uses peat. Its flagship offering has an unmistakable smokiness, but the Blackpitts label kicks it up a notch to produce a product that has more in common with what’s produced across the Irish Sea as opposed to within the border of the country it calls home.

Japanese distillers have managed to carve out one hell of a niche for themselves in recent years. However, there’s a reason it’s marketed as “whisky,” as most producers turned to Scotland when they first began to hone their approach. Hibiki did such a good job that it was forced to discontinue its 17-year and 12-year offerings due to the insane amount of demand, but Japanese Harmony is a more than adequate solution to a very good problem to have.

Kavalan may be produced in Taiwan, but the delicious single malt it ages in sherry casks is distinctly Scottish.

A number of American distillers have also channeled their inner Scotsman by whipping up single malts—including Iowa’s Cedar Ridge, which uses a unique solera tank to speed up the aging process with fantastic results.