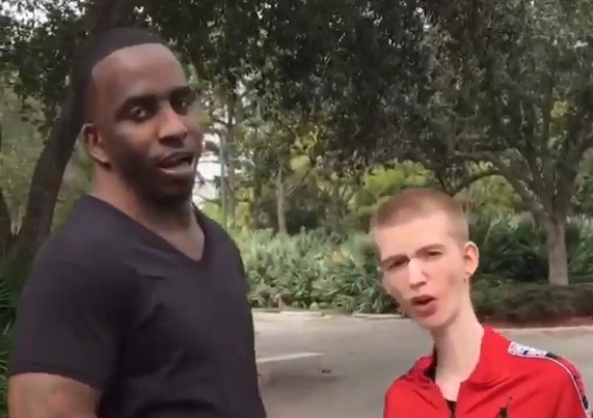 A mere two weeks ago, Charles Dion McDowell had his life changed forever when he was arrested on several drug charges. While it would generally be a negative getting arrested, his mugshot was a blessing in disguise despite getting viciously roasted by the entire internet. McDowell, who has a huge neck has made his curse into a gift. McDowell has blown up bigger than his neck and is now an internet phenomenon after the Escambia County Sheriff’s Office posted his mugshot on Facebook.

McDowell was arrested for possession of meth, cocaine, marijuana, and fleeing police, but you’ll never believe what happened necks. Now he’s guilty of being a living, breathing internet meme. But nobody could possibly prepare themselves for what happened this weekend when the two men who are neck and neck for having the most preposterous throats in the world collided. The wide neck guy met the long neck guy AKA Daddy Long Neck in one magnificent video appropriately titled “all necks matter.”

Only real niggas can stand necks to me pic.twitter.com/oaEFzrBFzN

Damn. That one guy’s neck is longer than a month that only had Mondays. Apparently, these two gentlemen live in the same neck of the woods and were able to hook up to make this amazing video.

The 31-year-old has been the source of hilarious neck memes for two straight weeks but he is turning the roasting into fame. Joe Rogan discussed the wide neck guy with Muay Thai and MMA fighter Miriam Nakamoto and that clip has nearly 1.2 million views.

The huge neck dude’s Instagram “damnwideneck” has swollen to over 227,000 followers where you can see videos such as this:

The huge neck dude is apparently training for an MMA fight.

The wide neck guy has his own line of shirts and is even selling this gem right in time for Christmas.

This is the only site selling my merch.
RT if you want one. #WideNeckGang https://t.co/EPJKOkOote pic.twitter.com/5xRTAigJfw

Do you wide neck guy, just try to not get arrested again and hopefully you’ll have a better future than Carlos Rodriguez AKA half head man, who was arrested for attempted murder and arson after he became an internet sensation for his intriguing mughsot.