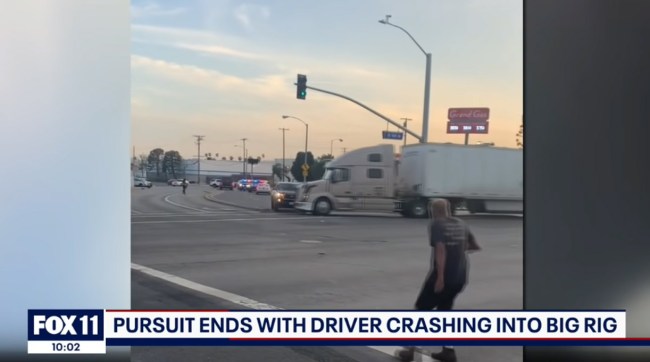 If you need a little pick-me-up, this is the story for you. An awesome big rig truck driver named Ahmed Shabaan decided that he had had enough of the lengthy police chase a murder suspect was taking authorities on all over southern California and took matters into his own hands.

In this case, however, those hands were holding on to the steering wheel of his semi, which he used to ram the pickup truck being driven by the fugitive.

Shabaan says he knew there was a murder suspect involved in a chase so he tracked the driver, lined up his big rig truck, and whammo! – no more police chase.

“I just thought to get him off the street,” Shabaan explained to Fox 11. “If I didn’t, and [officers] have been behind him for that long and didn’t stop him… I have the power.”

How much do you love that?

Speaking of guys who are awesome… how much do we love this guy in the bottom right of the clip below?

The driver of the pickup truck was taken to the hospital after police put him into custody. They did not specify what murder case in which the driver is a suspect.

Another person, a woman who identified herself only as “Roxy,” was a passenger in the suspect’s truck when Shabaan lowered the boom, said she had no idea that the driver was wanted for murder during what can only be described as an impromptu press conference.

“He’s wanted for murder, didn’t know that,” she said. “But it didn’t matter cuz it might’ve been self defense. Did you ask that? DID THEY ASK THAT?! DID THEY ASK IF IT WAS SELF DEFENSE OR DID THEY JUST SAY, ‘It’s murder.'”

That woman is going to be a star someday.