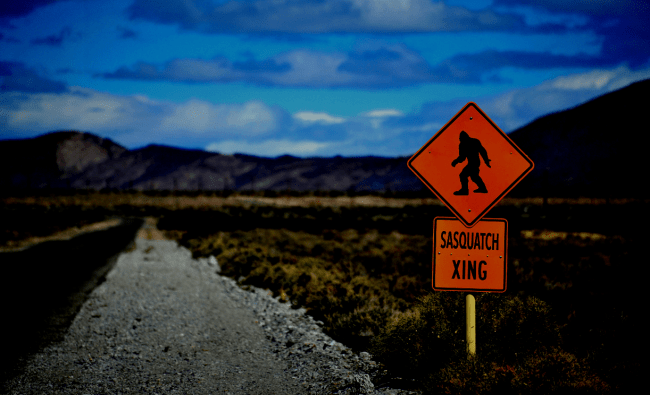 It is often thought that cryptids such as the Loch Ness Monster, Chupacabras, the Mothman, the Jersey Devil, and Bigfoot actually exist in a parallel universe to ours.

The reasoning for this is that it would explain why none of them have ever been captured and yet sightings of the creatures have continued unabated for decades.

Either the creatures travel between both worlds and when spotted in ours they quickly transport back to their universe to avoid capture and identification, or they are seen our world when visions of this parallel universe are seen by certain types of people with the ability to do so.

This explanation also applies to the hundreds of UFO sightings that have taken place over decades.

The one cryptid that is universal, Bigfoot, goes by 58 different names in countries scattered around the world including Sasquatch, Yeti, Wendigo, and Monkey Man.

Another one of those names used to describe the legendary creature is the Ohio Grassman (AKA Kenmore Grassman or Orange Eyes).

According to the Cryptid Wiki, the Grassman “is reportedly very similar to Bigfoot. It seems to be much more aggressive than any other Sasquatch species.”

The first prominent sighting of the Grassman occurred in the small village of Minerva, Ohio, in August of 1978 when the grandchildren of Minerva residents Evelyn and Howe Clayton, along with their friends, ran inside screaming about a hairy monster they saw in the gravel pit outside.

The Minerva case, Cryptid Wiki reports, “would form the most complex and important Bigfoot investigation in Ohio’s history.”

That wasn’t the first sighting of the Grassman, however. Two centuries earlier, in the 1700s, Native Americans who lived in the Ohio grasslands wrote about a “bipedal ape-men, referred to as ‘Wild Ones of the Woods.'”

Then, in the 1800s, sightings of a similar creature were made near the Ohio River.

Sighting of the Ohio Grassman, AKA Bigfoot, continue to this day with another being reported this month

In a video shared on November 11th, the Grassman was caught on camera three times.

The witness who shot the video, Nathan Gray, stated that the creature was “9 feet easily” and “moved like lightning.”

“I was seriously in shock when it first stood up in the spotlight,” he wrote. “I couldn’t hold the camera still to save my life.”

He also stated that it “takes a lot of hours to get a few minutes of footage,” adding, “I wish they would give me a show. I have been aired on the travel channel and a few others. I do my work solo 99% of the time and with minimal equipment.”