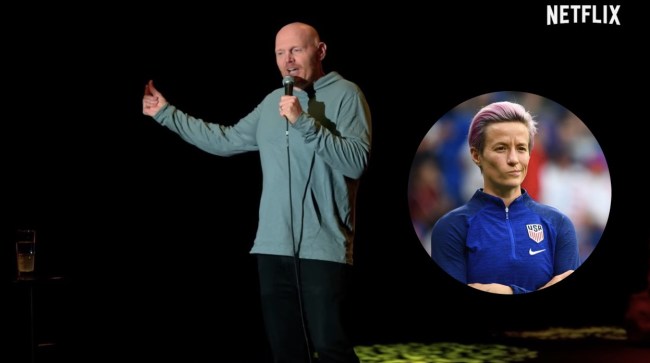 The latest stand-up special from powerhouse comedian Bill Burr — Bill Burr: Live at Red Rocks — hit Netflix on Tuesday, July 12, and with it came a particularly ruthless bit about the state of professional women’s sports in the United States.

During the first 20 minutes of his routine, Burr does a bit about feminism and how the discrepancy between the salaries of male athletes and female athletes is not the fault of men.

Stating that women’s sports don’t sell the same amount of tickets and merchandise as male athletes do, Burr said of the USWNT: “You’re playing in a 20,000-seat arena — 1,500 people show up. That’s not a good night! The promoter lost his f—ing ass on that gig.”

“Look at the WNBA: they have been playing in front of 300 to 400 people a night for a quarter of a century. Not to mention, it’s a male-subsidized league. We gave you a league and none of you showed up. Where are all the feminists? That place should be packed with feminists — faces painted, wearing jerseys, going f—ing nuts like the guys do!” Burr said.

“None of you went to the f—ing games. You failed them. Not me. Not men — women failed the WNBA. Ladies, name your Top 5 WNBA players of all time. Name 5 WNBA teams. Name the WNBA team in your city. You can’t do it!”

Burr then went on to point out how female-driven media empires such as the Kardashians and Real Housewives are thriving because that’s where their attentions lie.

“That’s the message you send: we’d rather watch that than a bunch of women come together as a team and try to achieve a common goal. We’d rather watch them absolutely f—ing destroy each other! And then in the end, you come back and you yell at f—ing guys.”

Needless to say, similar to fellow Netflix stalwart and modern stand-up comedy legend Dave Chappelle, Burr is going to find himself making headlines over the next couple of days due to his comments. And that’s probably exactly how he likes it.

RELATED: Bill Burr Explains When He Will And When He Absolutely Will Not Apologize For His Jokes