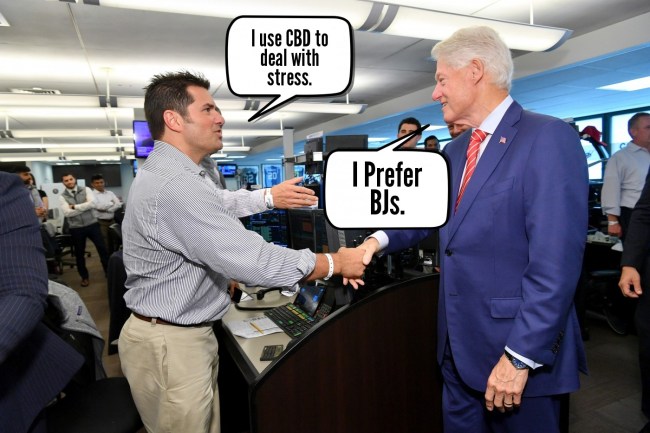 Bill Clinton should count his lucky stars that his most infamous sexual encounter was a consensual one, because he’s got a few dicey ones to his name.

Bill Clinton must’ve been a leper in a previous life to be known for just a consensual blowie.

Still, the public’s hunger for Lewinski content is insatiable, and an upcoming Hulu documentary titled, Hillary, promises to feed.

The Daily Mail pre-screened the documentary which is set to come out Friday, and it’s evident the 73-year-old has lived a life in politics.

Clinton claims that his affair with Monica Lewinsky was one of the just something he did to purge the stress of the job.

“Things I did to manage my anxieties for years. I’m a different, totally different person than I was, a lot of that stuff 20 years ago.”

Right, right. There’s Prozac. Zoloft. And Getting Blown At Work By An Intern. Take one a day, orally. Or you can stick them up your ass. It’s not on the box but believe me you can.

Can you believe this son of a bitch? https://t.co/S5tViNGrbL

Clinton says the pressure of being in the White House made him feel like a boxer who had gone 30 rounds and his affair was “something that will take your mind off it for a while.”

“Nobody thinks they’re taking a risk,” he says in the four-hour doc set to stream on Hulu from Friday. “That’s not why we do stupid things.”

We or I, bro? We didn’t splooge on the Oval office desk, you did pal. Amazing how people will credit themselves for their successes and the world for their failures. Sad.

Hillary admits that she was “devastated” after Bill finally sat her down on the bed to admit the affair after lying repeatedly.