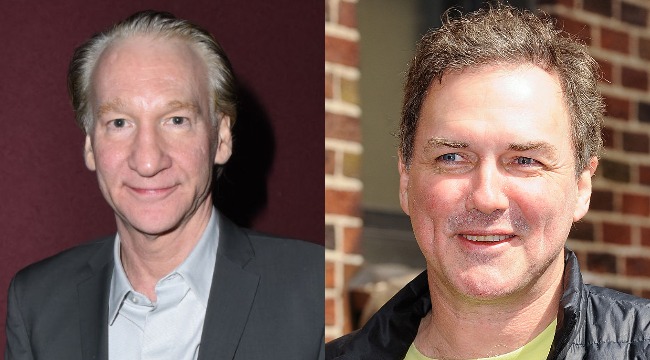 Every month or so, YouTube will serve me the a 15-minute montage titled “Norm MacDonald Sh*tting On Bill Maher,” which is a bit sensationalized but highlights Norm’s distaste for comedians (namely Maher and Dennis Miller) who’d rather be seen as intellectual over funny.

MacDonald lauds David Letterman, who he claims is “smarter than both of them,” for understanding that playing the every man is a fool-proof why to keep your audience on the same level.

Fast forward 25 years, Bill Maher appeared on Jimmy Kimmel Live to give his thought on Norm’s passing, claiming while he did not know him well (“no one did”), he was a “huge fan.”

“A guy who was not afraid to be too subtle for most people. That’s ballsy. He did the jokes he wanted to do.”

Maher also praised MacDonald for keeping his 9-year battle with cancer totally private, even from his family and closest friends.

“I love that I found out he died after he died,” Maher told Kimmel.

“Because to me, show business, we’re here for [the audience]. We’re not here for us. I’m not judging anybody, but there are people, whatever they’re going through, they share with the audience. I’ve never been in that camp. I’m not here to burden you, I’m here to lighten your burden. So the fact that I didn’t know about this, nobody knew about this — good one, Norm. He kept it to himself because he’s in show business. He’s here to make you happy.”

Check out the clip below.