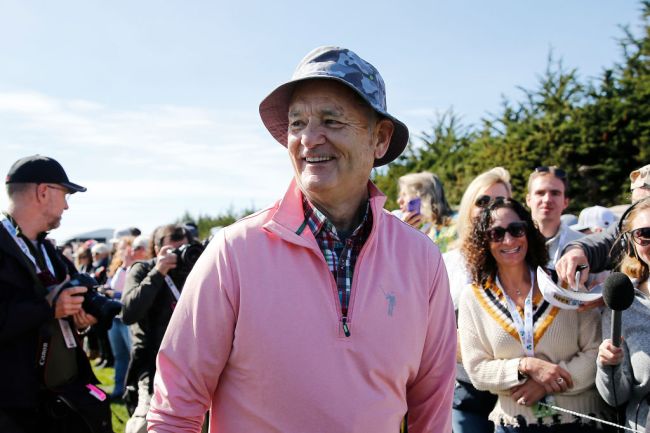 Once again, Bill Murray is a such a legend.

The hard-working lawyers for 1970s rockers The Doobie Brothers recently fired off an angry cease and desist to Bill Murray about the use of the their song “Listen To The Music” in video ads for his Zero Hucks Given golf shirts. The legal team representing founding Doobie Brother, Tom Johnson, said that the company name should be called Zero Bucks Given, noting that “we’d almost be OK with it if the shirts weren’t so damn ugly.”

Doobie Brothers suit Peter Paterno rubbed salt in the wound, reminding Murray about how big of a flop Garfield was – a rare miss in Bill Murray‘s beloved movie career cannon. “This is the part where I’m supposed to cite the United States Copyright Act, excoriate you for not complying with some subparagraph that I’m too lazy to look up and threaten you with eternal damnation for doing so. But you already earned that with those Garfield movies. And you already know you can’t use music in ads without paying for it.”

Bill Murray receives a legal demand from the Doobie Brothers. And it’s everything you’d want it to be… pic.twitter.com/R1L99yZSBj

The situation went viral, prompting the legal team at Murray’s golf company to respond on Friday night, posting the letter on Twitter.

“First, I would like to compliment you on finding levity in the law at a time when the world and this country certainly could use a laugh. Your client’s demand was able to cut through the noise of the news cycle and remind us how much we all miss live music these days.”

“We would also like to confirm that both our firm, and the good folks at William Murray Golf, are indeed fans of the Doobie Brothers’ music, which is why we appreciate your firm’s choice of ‘Takin’ It to the Streets,’ rather than to the courts, which are already overburdened ‘Minute by Minute’ with real problems.”

“In the immortal words of Mr. Murray—the more relaxed you are, the better you are at everything… so let’s pour one up and unwind with a listen of the recently-released ‘Quadio’ box set and plan to cross paths at a Doobie Brothers’ 50th anniversary show in 2021 when some level of normalcy resumes.”

In the immortal words of the @TheDoobieBros—"What the people need is a way to make them smile."

The letter ends with Murray’s golf company apologizing for the mistake and asking for shirt sizes to send to the whole office to make things right.

This a masterclass in conflict-resolution theory – Approaching tense situations with a sense of humor can solve most things in life.  A little levity goes and not taking yourself too seriously goes a long way.

Glad Murray and the Doobie Brothers could work it out.

Garfield still stinks, though, and I’m glad we can all laugh at that 20+ years later.