Bill Skarsgard Says Demonic Clown Pennywise Is Going To Be Even ‘Angrier And Scarier’ In ‘IT: Chapter Two’ 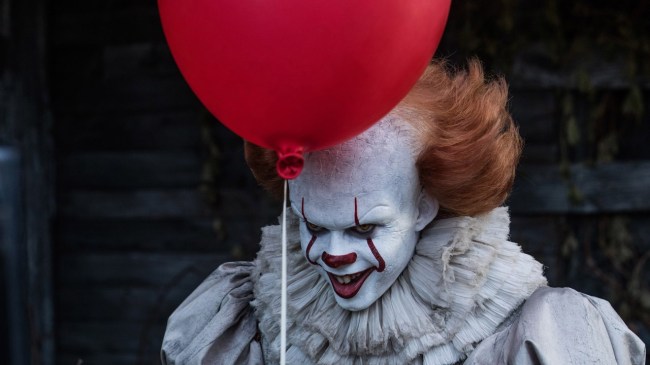 I’m not sure how this could be possible, but the man who played Pennywise the Dancing Clown in IT, Bill Skarsgard, says that his character is somehow going to be even “angrier and scarier” in IT: Chapter Two.

I mean, jeezus, Skarsgard himself had freaky nightmares about Pennywise after playing the demonic clown in the first IT, so how much more demented can this character get?

In a new cover story for Entertainment Weekly, Skarsgard said, “He’s scarier and he’s angrier. There’s a couple of very brutal things in the film.”

So he’s worse than this now?

One of the movie’s other stars, James McAvoy, revealed that IT: Chapter Two will closely follow Stephen King’s source material.

“Instead of us just standing around going, ‘Oh, I remember that time,’ we get to show it to the audience,” McAvoy told EW. “Which is great, because that would be real sad if we had to say goodbye to that cast that the audience across the world fell in love with. And actually, in a weird way this movie resembles the structure of the book, in that it goes back and forth.”

McAvoy added, “When you leave Derry, something happens where you forget it all. I think it’s like a [power] of Pennywise’s. Because if everybody could remember what he gets up to every 27 years through history, we’d go, .Hey, Derry’s really f***ed up, we should do something about that. We should send in the f***ing Army!'”