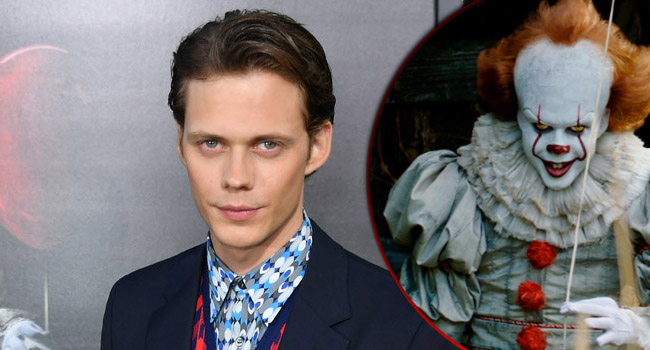 Hard to believe, but apparently playing the part of an evil, murderous, child-eating clown like Pennywise in the film IT like Bill Skarsgård did plays some nasty tricks on one’s mental well-being. Go figure.

Nor did learning how he came up with Pennywise’s creepy voice or seeing Skarsgård show how he could do the clown’s demented smile on demand during an appearance on Conan.

Oh dear God, I’m going to have those nightmares again, aren’t I?

Turns out I am not the only one still haunted by that evil motherf**ker Pennywise. So is Skarsgård. Good, I say.

“I liken every character that I do to a relationship that you’re in,” Skarsgård tells EW. “Pennywise and Bill go into this sort of relationship together, and I’m trying to figure out who he is and I have to devote so much time and effort to this other person – or thing, in this case – and that goes on for months.”

After living in Pennywise’s shell for so long, it began to warp his attitude in ways even he couldn’t see. “It’s just like being in a very destructive relationship,” Skarsgård said. “People don’t really realize it until they’re out of it. All your friends go, ‘You need to dump this piece of sh–, he or she is destroying your life.’ And then once you’re out of it, you see, ‘I was so miserable.’ But I wouldn’t say I was miserable doing Pennywise because I had a lot of fun with it as well.”

Yeah, but at least it was all behind him once filming completed… or was it?

“I was home, done with the movie, and I started having very strange and vivid Pennywise dreams. Every night, he came and visited.”

Appropriately, Pennywise took on different forms in these visions.

“It was in the shape of either me dealing with him, sort of Pennywise as a separate entity of me, and then also me as Pennywise in circumstances that I didn’t appreciate,” Skarsgård said. “Like, I’m Pennywise and I’m really upset that I’m out in public and people are looking at me.”

Ummm… The Dark Half, anyone?

Oh well, at least Skarsgård has until September 6, 2019, when the sequel comes out to get things squared away between himself and Pennywise.

Good luck with that, bro.