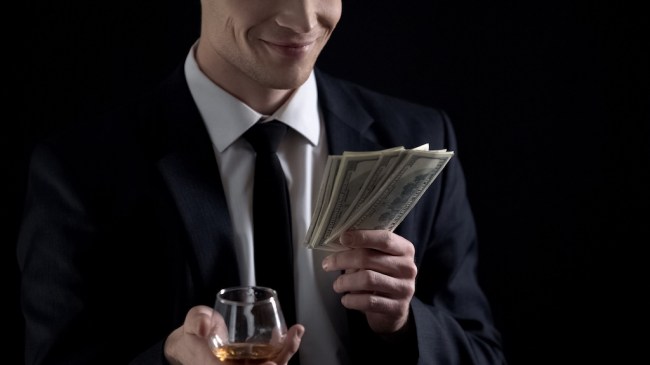 Being a billionaire sounds like the fucking life, doesn’t it? Imagine how much simpler life would be with unlimited amount of money at your disposal, luxury cars and houses to keep you cozy, private jets and islands to escape the rest of the world, and a general sense of power that comes with being filthy rich. Yeah, that’s the life most people probably strive for.

And, as you might imagine, being a billionaire during a global pandemic sure as hell has lots of benefits, too. Unlike the majority of the population — which is scared to death of losing a job, paying a mortgage they don’t have cash for and figuring out how to get medical help if (God-forbid) they need it — wealthy people seem to have all the connections in the world, and lose sleep on missing out on a deal, not because they just blew their life savings to feed their family that month.

Bluntly put: Being a billionaire brings very little worry about the great unknown, because it’s a reality so very few people ever know about.

To dig deeper into the differences between being mega-rich during this pandemic and being a regular Joe, Bloomberg writer Max Abelson wrote about his experiences talking to a billionaire on the phone over the past few months — which outlines how the Wall Street moneymaker has changed his tune about the state of the economy.

Starting their conversations on March 11, Abelson said he reached out to the “richest person” he knew, believing that the guy — who remained anonymous as part of their deal to continue to communicate — would be “well connected” and “might know what was going on.” The writer ended up detailing the shift in perception about the pandemic throughout their conversations, because, on that first call, here’s what the billionaire mentioned when pressed about his level of worry.

“What the f—, I’m not worried,” he said. “I’m sure I already have it. What do I care?” His family was heading to their country house outside New York City, but he was staying put, working the phones for his job investing billions of dollars for clients. He didn’t know much about the unfolding catastrophe, which made him just like everyone else.

By the next day, March 12, Abelson writes about the financial implications of the pandemic. That was the day that Wall Street took a tumble, with the S&P 500’s 9.5 percent plummet being the biggest since Black Monday in 1987. Even still, the billionaire didn’t bat an eye about the virus.

“It’s not this panic, ‘Oh my God, the world is going to end,’ ” he said. “Everyone knows it’s over in two months.” His dismissiveness was almost eerie. “You know the world is fine.”

Even after March Madness was cancelled, celebrities like Tom Hanks were infected, unemployment numbers were rising and cases continued to spread, the billionaire that Abelson spoke with didn’t seem concerned. In fact, the Wall Street mogul talked about the risk of shutting down the economy in order to save a couple of old peoples’ lives; who were just strangers anyway.

“Why aren’t we saying, ‘Hey, anybody who’s 30 or under, you guys still go to work—you guys just don’t see your parents?’”

One answer was that they might be afraid to die. A poll would soon show that almost 9 out of 10 Americans weren’t ready to return to daily life.

“If people aren’t going to work, it’s a depression. Trump isn’t wrong. He just doesn’t know how to explain it,” the billionaire said. He took a stab at putting it succinctly: “Do you want to end up losing your life savings so that the old person you don’t know can live?”

If it sounds like the Wall Street billionaire is a little out of touch, it’s because he began as such. Remember, this guy cares about one thing: his bottom line. Everything else seems to be sacrificed along the way, just as long as he and his clients are making more money. It’s why he briefly spoke about the privilege he has given his connections.

“I could get my hand on a test,” he said. He told me his peers were quietly inquiring about reserving beds at private hospitals in case they got sick. He had connections to the boards of the best hospitals but said he’d call in favors only for the people closest to him.

After adjusting to work from home life and finding the usefulness of video calls to communicate with clients and coworkers, the billionaire began to change his tune about the economy and workforce. All of a sudden, he sounded empathetic about the situation that millions of people were experiencing due to unemployment.

A month ago, he acknowledged, most Americans hadn’t expected to get paid without working. “Now it’s, ‘Hey, wait a minute. I can’t work, not because I don’t want to, but I can’t. And you should be paying me, and if you don’t, you’re jeopardizing my life.’ ” He went on in the voice of a worker: “So-and-so can afford to pay me, but I can’t afford to go to work. If I do, I’m jeopardizing my life. Is my life not worth it?”

Likewise, the Wall Street mogul changed his tune about young people returning to the office, recognizing that more 20- and 30-year-olds were showing symptoms and being hospitalized.

In the end, while the mega-rich man did change his tune about sacrificing lives in order to make a profit and keep the economy afloat, he admitted he’s not hurting financially or emotionally because of the pandemic. The market has bounced back; just as he knew it would. The system is back to normal — which is something that should scare the shit out of everyday people who don’t have the luxury of making millions each day.

“If you don’t like the system, I have no qualms. You want to break the system? Then you’d better be in charge.” His words rang in my ears.

You want to break the system? You better win. Because, if you don’t, the system is going to break you.”

That’s the mentality of a billionaire who knows how to win no matter what the circumstances. It’s a far cry from the control and power most of us have, and it’s interesting to hear how this Wall Street mogul seems to brush aside all of the worry and uncertainty that’s happening because of the pandemic. It’s an advantage many of us don’t have the pleasure of doing.