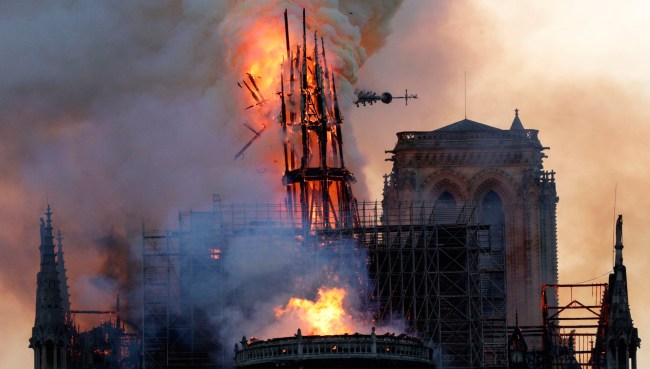 Within six hours of Notre Dame cathedral in Paris catching on fire back in April, two French billionaires, Francois-Henri Pinault, who owns the Gucci and Saint Laurent brands, and Bernard Arnault, the fourth-richest person in the world and owner of brands like Louis Vuitton and Dior, had already pledged over $338 million to help in the reconstruction of the iconic landmark.

Within two days of the disaster, L’Oreal, the Bettencourt Meyers family, and the Bettencourt Schueller Foundation announced they would be donating another $225 million towards rebuilding efforts, and Patrick Pouyanne, CEO of French energy company Total, promised another $112.8 million, moving the amount pledged to almost $1 billion by some of the richest families in France.

“The big donors haven’t paid. Not a cent,” Finot told The Associated Press. “They want to know what exactly their money is being spent on and if they agree to it before they hand it over, and not just to pay employees’ salaries.”

Instead, it has mostly been American and French individuals’ private donations to Notre Dame charitable foundations that have been footing the bill since the April 15th fire.

The Friends of Notre Dame de Paris was founded in 2017, and its president, Michel Picaud, estimates that 90% of the donations it has received have come from American donors. Indeed, Picaud just returned from a fundraising trip in New York.

“Americans are very generous toward Notre Dame and the monument is very loved in America. Six out of our 11 board members are residents in the U.S.,” Picaud said.

The first private check toward the rebuilding, according to Picaud, is being transferred by the foundations for 3.6 million euros ($4.1 million). That also includes funds from mainly small French donors, collected by the sister Notre Dame Foundation. The French state has also paid funds toward the massive consolidation operation.

While the billionaire donors delay signing their checks, the workers at the cathedral face the epic task of cleaning up the lead poisoning that has become an issue for the Parisian island on which Notre Dame is located.

Here are the excuses these billionaire families have given for why their very public and grandiose pledges of millions of dollars have yet to be paid, according to The Associated Press.

• A spokesman for the Pinault Collection said the Pinault family hadn’t paid any money yet because of a delay in contracts.
• The LVMH Group and the Arnault family said it was signing an agreement with Notre Dame’s foundations and “the payments will be made as the work progresses.”
• Total has pledged to pay its 100 million euros via the Heritage Foundation, and the director of the foundation said, “the companies are waiting for the government’s vision to see what precisely they want to fund.”
• The Bettencourt Schueller Foundation said it hasn’t paid yet because it wants to make sure its donation is spent on causes that fit the spirit of the foundation, supporting craftsmanship in art.

Funny how none of these strings attached to their pledges were mentioned when they initially made them. Then again, that would have taken some of the shine off their grand gestures, I suppose.