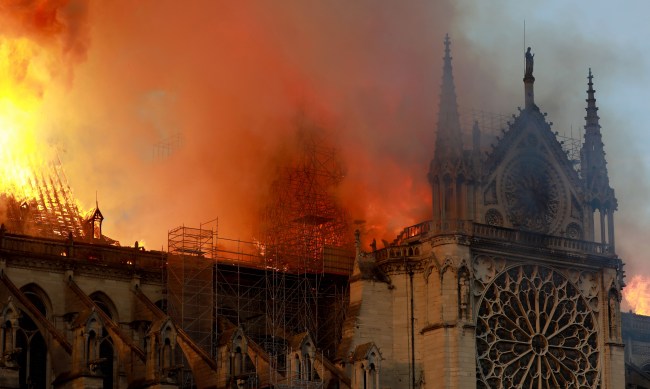 The world was stunned when the historic Notre Dame Cathedral in Paris was consumed by fire, collapsing the spire, and causing millions of dollars in damage.

Within six hours of the blaze taking place, two French billionaires had already pledged over $338 million to help in the reconstruction of the cathedral.

On Monday, Salma Hayek’s husband, French businessman Francois-Henri Pinault, the chairman and CEO of Kering, and President of Groupe Artémis, announced, “My father (François Pinault) and myself have decided to release a sum of €100 million from our Artemis funds (the family holding company) to participate in the effort that will be necessary for the complete reconstruction of Notre-Dame.”

Bernard Arnault, the fourth-richest person in the world and the chairman and CEO of LVMH, also announced on Monday…

“The Arnault family and the LVMH group, in solidarity with this national tragedy, are committed to assist with the reconstruction of this extraordinary cathedral, symbol of France, its heritage and its unity.

They will donate a total sum of 200 million euros [$225 million] to the fund dedicated to the reconstruction of this architectural work, which is a core part of the French History.

In the meantime, the LVMH Group puts at the disposal of the State and the relevant authorities all its teams – including creative, architectural and financial specialists – to help with the long work of reconstruction and fundraising, which is already in progress.”

"In the wake of this national tragedy, the Arnault family and the LVMH Group pledge their support for #NotreDame. They will donate a total of 200 million euros to the fund for reconstruction of this architectural work, which is an integral part of the history of France." pic.twitter.com/utvJT8xJht

On Tuesday, L’Oreal, the Bettencourt Meyers family, and the Bettencourt Schueller Foundation announced that they too will donate over $225 million towards the rebuilding of Notre Dame Cathedral.

French oil and gas company Total pledged another 100 million euros ($112.8 million), and Apple CEO Tim Cook also announced that his company would be among those donating to the cathedral’s restoration efforts.

We are heartbroken for the French people and those around the world for whom Notre Dame is a symbol of hope. Relieved that everyone is safe. Apple will be donating to the rebuilding efforts to help restore Notre Dame’s precious heritage for future generations.🇫🇷

The total pledged by just those four donors amounts to 600 million euros or $676.9 million – raised in less than 24 hours – in a truly astounding display of generosity.

Meanwhile, according to a 2015 World Economic Forum report, there are more than 650 million people suffering from hunger.

Let’s do some math here.

Is it just me or is something just not adding up here?