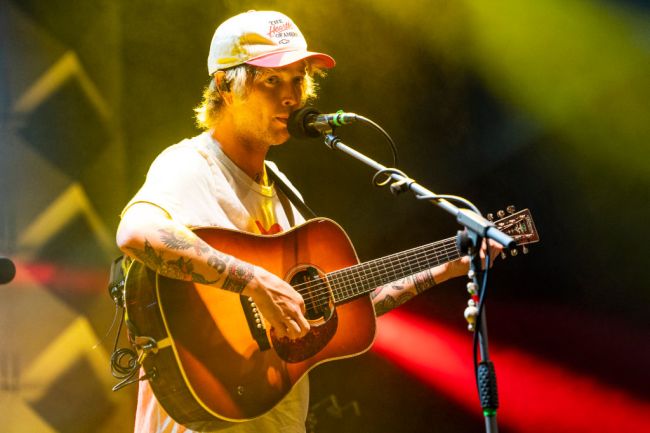 Billy Strings won Halloween. The 29-year-old guitarist and bluegrass musician wrapped up a three-night run in Asheville on All Hallow’s Eve and did so in style.

Dressed as the cast of the Wizard of Oz, Strings and his three-piece band payed homage to the 1939 film with a heady, vibrant backdrop that featured clips from the movie. They also dressed as the cast, with Strings as the Scarecrow, banjoist Billy Failing as Dorthy, mandolinist Jarod Walker as the Tin Man and bassist Royal Masat as the Cowardly Lion.

The way that they did the entire weekend was super unique.

On Friday, they were costumed in theme with the black and white start of the film and the stage lighting was dark and shadowy.

On Saturday, the focus turned toward the middle of the movie when the characters head out to meet the Wizard.

And on Sunday, in full, bright color, the band concluded with the movie’s upbeat and joyful finish.

All three nights featured an abundance of covers and debuts. It was awesome.

You can now re-watch the Billy Strings Halloween show / run via Nugs.net – only $14.99 for nugs.net subscribers.

Friday evening’s first set began with the cast of characters breaking out into Judy Garland’s ‘Somewhere Over The Rainbow,’ and intermixed ‘If I Only Had A Brain’ throughout the evening. They also played ‘Brain Damage’ from Pink Floyd’s album, The Dark Side Of The Moon, which is notoriously linked to the movie.

In addition to the nods to The Wizard of Oz, Strings and co. played music from his new album Renewal. They also CRUSHED covers of The String Cheese Incident’s ‘Black Clouds’ and Robert Hunter’s ‘Thunder.’

Set I: Red Wing, Fire on My Tongue > Must Be Seven, Ready For The Times To Get Better, Over The Rainbow, End of The Rainbow, Ice Bridges, Everything’s The Same > Pyramid Country > Running, Highway Hypnosis

Saturday’s set was equally as unique and they picked up right where they left off. Strings began the show with music from Renewal. He then included covers of The Beatles’ ‘I’m So Tired,’ The Jimi Hendrix Experience’s ‘Castles Made of Sand,’ as well as the traditional tune ‘Little Maggie.’

Set I: This Old World, In the Morning Light, Little Maggie, On the Line > Ruby Are You Mad, Enough to Leave, I’m Still Here, Running the Route, Know It All, The Likes of Me, Pyramid Country

Set II: Pyramid Country (Reprise), Gold Rush > June Apple > How Mountain Girls Can Love, If I Only Had a Heart, Hollow Heart, If I Only Had The Nerve, Courage For The Road, I’m So Tired, Let The Cocaine Be, Ernest T. Grass, Show Me The Door, Away From The Mire

Enc: Castles Made Of Sand

Strings and his band wrapped the three-night The Wizard Of Oz themed run on actual Halloween night. They opened with a debut cover of The Rolling Stones’ ‘You Can’t Always Get What You Want’ and closed with The Doors’ ‘Five to One.’ In between, they covered the Grateful Dead’s ‘Brokedown Palace’ and ‘Samson & Delilah,’ plenty of Strings originals, and even teases of ‘Eye Of The Tiger.’

In a fitting finish to the weekend, Strings and his bandmates came out for an encore. They closed things out with Elton John’s ‘Goodbye Yellow Brick Road,’ as balloons dropped from the ceiling.

Set I: You Can’t Always Get What You Want, Nothing’s Working, Meet Me at the Creek, The First Whippoorwill, Samson and Delilah, Ole Slew-Foot > Five to One

REMINDER: You can now re-watch the Billy Strings Halloween show / run via Nugs.net – only $14.99 for nugs.net subscribers.

Strings is incredibly talented. His ability to shred bluegrass classics, cover some of the greatest rock bands of all-time, and incorporate some serious jam band bangers is unmatched.

When he gets on stage, it is sure to be a great time for everybody involved. You can tell how much joy he takes in sharing good music with the world.

His Halloween weekend was a testament to his originality and musicality. Hats off to Strings for winning the holiday.