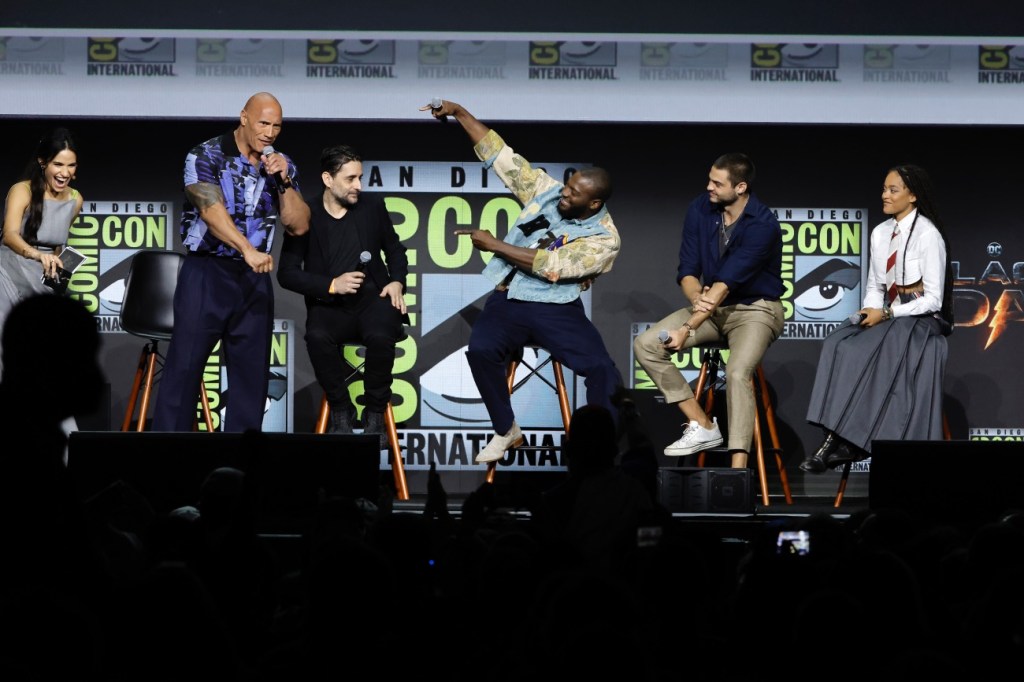 Actor Aldis Hodge is set to appear in the upcoming DC Comics film Black Adam co-starring alongside Dwayne ‘The Rock’ Johnson, one of the biggest celebrities on the planet. This is going to be a HUGE film for The Rock (based on the trailer) as it represents his foray into the superhero genre where he’ll be starring as the eponymous antihero.

Aldis Hodge will appear in the film as Carter Hall / Hawkman. His previous acting credits include One Night in Miami, Friday Night Lights, Black Mirror, Hidden Figures, and Straight Outta Compton to name a few. Suffice it to say he knows the auditioning process pretty well by now since he’s been acting since 1995’s Die Hard With A Vengeance.

Hodge auditioned for a role in Black Adam and after not hearing back for a few weeks he’d assumed he didn’t get the part. But during this time, someone was pranking his phone. So when he finally did get a call from Dwayne ‘The Rock’ Johnson to congratulate him on landing the role, Aldis Hodge thought he was being pranked by the person messing with his phone. He then proceeded to flips–t on The Rock not realizing it was actually Dwayne Johnson on the other end.

Aldis Hodge: “I had auditioned and there was a couple weeks where there was radio silence so I thought that I didn’t get it. And somebody had been playing on my phone, sending me really random messages like, ‘Hey, this is such-and-such.’ And then they would do it again. And then D.J. called, like, ‘Hey, this is D.J.’”

Interestingly, after putting all the pieces together Aldis Hodge still thought The Rock was only calling to tell him that he didn’t get the part. The Rock is one of the busiest men in Hollywood and it’s hard to imagine him personally calling everyone who doesn’t get a part in his films but in a stressful moment like that you’re not thinking clearly.

Once Aldis realized what was happening, here’s how the conversation went:

Aldis Hodge: “He said, ‘Welcome to Black Adam.’ I put the phone down for a minute, my mind exploded and I came back to Earth and picked the phone back up and I said, ‘Hoo! Thank you, brother, this is awesome, man.’

“[The film] means a lot to him but he also shared how much it means to him, how long he had been working on it, 10-plus years. … So that was pretty cool. But yeah, I almost hung up on him. I didn’t think it was him.”

In Hodge’s defense, when you speak with a mega celebrity on the phone and they have an iconic voice it can be very discombobulating. I interviewed Arnold Schwarzenegger a few years ago and he sounded EXACTLY like he does on screen. It was hard to believe it was real.

Hodge is very excited for this project.

Viola Davis is back as Amanda Waller in #BlackAdam, and Aldis Hodge couldn’t be more excited about doing a scene with her. #SDCC pic.twitter.com/hn4UDihnnY

I can’t explain why the happiness from this TikTok is so infectious but it is:

So excited to see Aldis Hodge kill it in Black Adam! The talent and kindness inside him are absolutely tremendous… He also plays a mean game of slide! #sdcc #blackadam pic.twitter.com/R9rrQnErPu

I’m rooting for The Rock’s Black Adam to succeed. DC hasn’t seen nearly as much success with their intellectual property outside of Superman and Batman as Marvel has. It would be best for everyone if a few of their projects could compete with Marvel.