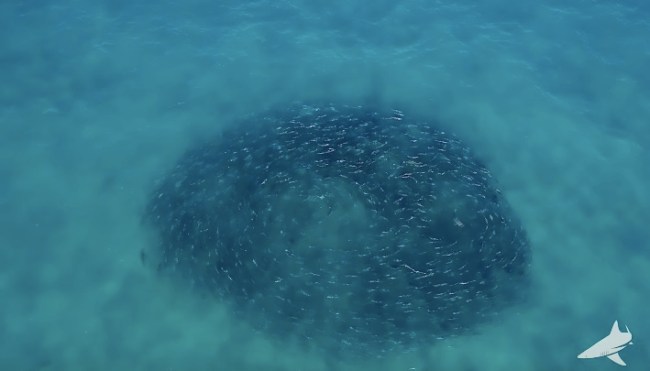 I’ve been addicted to the BlacktipH YouTube channel for years. It’s the largest channel on YouTube dedicated to fishing, and it’s also the best. The guy who runs BlacktipH is named Josh, and when he heard there was a massive school of fish not too far off the beach getting torn up by a large school of sharks he grabbed the 4K drone and started filming.

What he found when he flew up the drone was a school of large bluefish. We get plenty of bluefish down in Florida but they’re typically in the 2-4 pound range, and we see them most often during the cooler months. These were all massive bluefish by Florida standards, the size you typically only see up in the Northeast from New Jersey to Maine.

Following the fish were hundreds of sharks feasting on them, creating a massive bait ball feeding frenzy. If you’re a fisherman and/or the type of person who enjoys watching Planet Earth then you’re going love this footage. You should also consider subscribing to the BlacktipH YouTube channel because every fishing video is shot on 4K and the quality is better than 99% of the footage you’ll see in fishing TV shows.