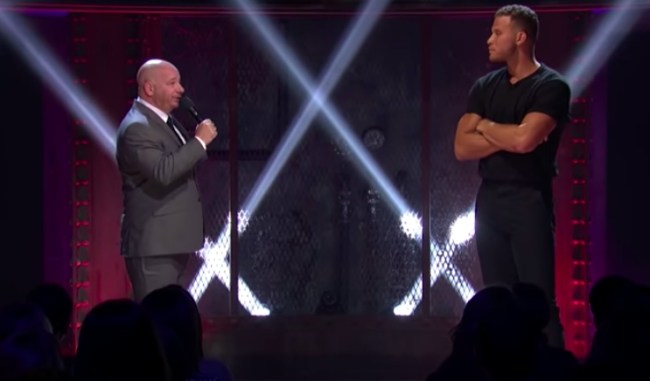 Who would you rank on your Mount Rushmore of Funniest Professional Athletes of All-Time? Off the top of my head, Sir Charles Barkley (“Did you graduate from Auburn?” “No, but I have a couple people working for me who did.”), Mike Tyson (“I’m going to f*ck you till you love me”), Peyton Manning (SNL United Way skit for the win), and Yogi Berra (Baseball is 90% mental and the other half is physical).

Blake Griffin has been making a case for himself over the past couple years by demonstrating wit and self-awareness in the stand-up comedy circuit.

Most recently, he appeared on Tuesday night’s episode of Roast Battle to compete against the Roastmaster General himself, Jeff Ross. Ross and Griffin took verbal swings at each other in front of judges Anthony Jeselnik, Nikki Glaser and Pete Davidson, and to Griffin’s credit, there is no clear-cut winner.

You can watch the entire 18-minute roast at the bottom of this post, or if your boss is on your ass, check out a couple of Blake’s most solid jokes below.

Spoiler alert: The judges voted 2-1 in favor of Jeff Ross, but Griffin was given high praise for his valiant attempt.