Blue-Ringed Octopus, One Of The Most Venomous Creatures On Earth, Filmed Swimming In Popular Pool 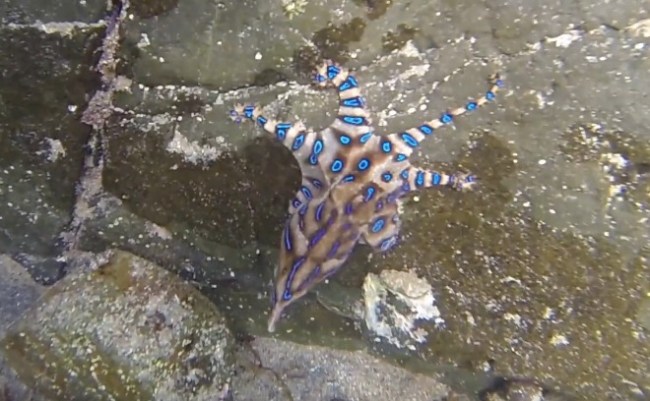 Australia is home to the deadliest creatures on the planet. You can’t walk down the street without bumping into some sort of venomous creature (eastern brown snake, taipan, funnel web spider) or animal that’s capable of killing you with its teeth (great white sharks/crocodiles).

Australians love swimming in natural saltwater swimming pools off the beach. Tidal pools with corals and other sea life. One of the most venomous creatures on the planet, the blue-ringed octopus, was filmed swimming just inches away from a camera and feet away from blissfully unaware swimmers at the Kiama Rock Pool. The blue-ringed octopus carries enough neurotoxin to kill 26 adult humans within a matter of minutes.

It doesn’t look like much but the blue-ringed octopus truly is one of the most venomous creatures on the planet. When they’re threatened their yellow skin and black/blue rings change color dramatically, and they can release a deadly neurotoxin tetrodotoxin. Antivenom for the blue-ringed octopus doesn’t exist and most people who are bitten don’t even realize they’ve been bitten because it’s a relatively painless bite that leads to nearly instant respiratory paralysis.

The good news is that the blue-ringed octopus is typically a shy creature and wants nothing to do with people. The only times they bite are when they get stepped on or harassed. Which is the exact type of thing that might happen inside a popular rock swimming pool.