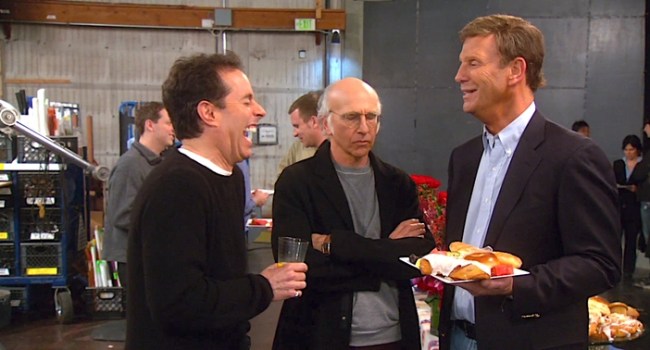 Bob Einstein died on Wednesday at the age of 76. Einstein was a brilliant comedian who told shockingly outrageous jokes all while he kept a straight face. Einstein was also his alter-ego Super Dave Osborne, an incredibly arrogant stuntman who struggled to accomplish any of his stunts. Born Stewart Robert Einstein, he had a major resurgence recently when he became Larry David’s “best friend” Marty Funkhouser on Curb Your Enthusiasm and on Arrested Development.

Einstein was recently diagnosed with cancer and died at home in Indian Wells, California. The Einstein family has asked that anyone who wants to honor Bob Einstien should make a donation to the Leukemia & Lymphoma Society.

Einstein’s illness prevented him from completing episodes in Season 10 of Curb Your Enthusiasm, which airs this year. “Never have I seen an actor enjoy a role the way Bob did playing Marty Funkhouser on Curb,” Larry David said in a statement. “It was an amazing, unforgettable experience knowing and working with him. There was no one like him, as he told us again and again. We’re all in a state of shock.”

Known for his raspy voice and over-the-top hilarious jokes, Einstein got his first big break when he was part of The Smothers Brothers Comedy Hour, a comedy variety show from the 1970s. After his run as Super Dave Osborne, Bob became one of the most beloved characters on Curb Your Enthusiasm. One of Marty Funkhouser’s most iconic appearances on Curb was during the Seinfeld reunion episode.

In Episode 9 of Season 7 of Curb, Larry reluctantly introduces Jerry Seinfeld to his friend Marty Funkhouser. Jerry is there for the Seinfeld reunion that David is directing. This one-take scene was the first time that Bob Einstein had ever met Jerry Seinfeld. Funkhouser comes right up to Seinfeld and asks, “Wanna hear a joke?”

According to the lore of the HBO comedy, Seinfeld was not told the joke because David wanted his natural reaction to the raunchy story. Funkhouser delivered a hilariously filthy minute-long joke that would not only shock Jerry, but also have him double over in laughter. “It surprised me,” Jerry tells Funkhouser after the joke. “I had no idea it would be that revolting.” After Funkhouser walks away, Jerry tells David, “I like that guy.”

Goodbye Bob Einstein (aka Marty Funkhouser) and thank you for this joke. "I like that guy." pic.twitter.com/dmOJDx4CT4

The comedy duo reconnected on Comedians in Cars Getting Coffee and recounted the uproarious scene. “And the day I meet you, the bit we’re doing is you’re going to tell me a joke,” Seinfeld tells Einstein. “The dirtiest joke in the world,” Bob adds. “They left in your laugh. I was so excited. That was the greatest.” Einstein was the first person to appear on Comedians in Cars Getting Coffee twice.

The filthy Curb Your Enthusiasm joke wasn’t the only time that Bob cracked up Jerry with his fantastic sense of humor. In an episode of Comedians in Cars Getting Coffee, Einstein hit Seinfeld with this comical story about puking at the bar that made the stand-up comic laugh.

During a Q&A session with the cast of Curb Your Enthusiasm in 2012, Marty Funkhouser interrupted everything and said his four favorite words: “Wanna hear a joke?” Then uncorked one of his wildly inappropriate and outlandish jokes.

RIP Bob Einstein, you will truly be missed. I like that guy.