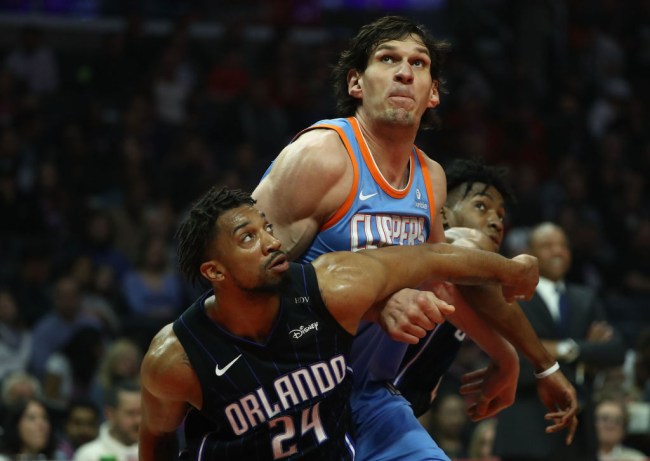 Boban Marjanovic is a 7’3” Serbian demigod who looks like a member of Space Jam’s MonStars. Actress and singer Kristin Chenoweth is 4’11” who looks like a gymnast. These two creatures are fully matured and of the same species, though they represent opposite sides of the human height spectrum. Both of them cannot ride the rides at Disney World for completely different reasons.

Tuesday night, Chenoweth was in Oklahoma City to sing the national anthem before the Clippers/Thunder game when she bumped into Boban pre-game. The interaction resulted in some legitimately unbelievable photos. It should be noted that Chenoweth also has high heels on, giving her an extra two inches.

Boban Marjanović and Kristen Chenoweth, who is at the Thunder game to sing the National Anthem pic.twitter.com/uSdOC6ygjK

These photos of Kristen Chenoweth standing next to the gigantic Boban Marjanović are great https://t.co/nSyLqsWV8W pic.twitter.com/zRzegh8Fsl

People on Twitter were equally dumbfounded by the difference in stature between the two, and it birthed some pretty hilarious reactions.

Since no one else did it I will… pic.twitter.com/iQhX9aWSJ2

Guys we all thinking the same

Unfortunately, these photos are likely where it will end for these two, as Boban is currently married with a couple kids. What could have been…