Bobby Shmurda Put On His Knicks Hat After 7 Years, Only To Betray The Organization And Change Allegiances 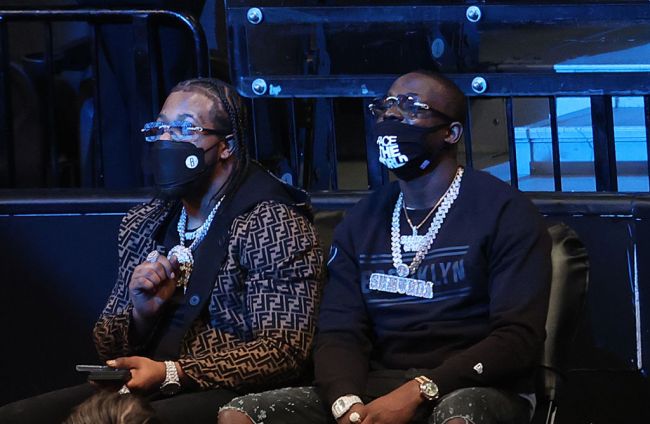 Bobby Shmurda broke my heart yesterday. Almost seven years ago to the date, the pioneer of Brooklyn drill music sent the nation into a frenzy with his music video for ‘Hot N—-‘ and famously launched his New York Knicks hat to the moon. The song exploded to No. 6 on the Billboard Hot 100 and even your grandmother was hitting the Shmoney Dance. For a franchise that had been so bad for so long, it was the most relevant (in a positive light) that the Knicks had been since Patrick Ewing and Lattrell Sprewell were beating down everybody at Madison Square Garden in the late 90s.

As the song was reaching its peak as the year’s summer hit, Shmurda was arrested and charged with felony criminal possession of a weapon. Police saw him flashing a weapon in his apartment, and when they went to scope out the scene, he hid it in a couch. Not a year later, police arrested Shmurda and 14 others, charging him with conspiracy to commit murder, reckless endangerment, and drug and gun possession. NYPD officers said that what he was depicting in his music was “almost like a real-life documentation of what they were doing in the street.”

Shmurda faced up to 25 years in prison and ultimately took a guilty plea deal that helped his friend Rowdy Rebel serve less time. He took the fall for his guys and was sentenced to seven years in the clink, showing what a true homie he really is. While in prison, Shmurda was was caught sneaking a shiv into his cell and got caught up in a few brawls that included members from the Bloods and the Crips. He was moved to a few different prisons, and amidst all of the poor behavior, received some additional length on his sentence. Eventually, he was released in late February and is serving out his probationary period as a free man.

It was a great day for Knicks fans, and therefore the rest of the world. The only question that remained was when Ackquille Pollard would be reunited with his hat and we received the answer on Monday, 22 days after his release.

Bobby Shmurda’s hat is BACK ‼️🧢pic.twitter.com/9RAdRUkNTR

Shmurda donned his famous grey cap with the blue brim on the day that the Knickerbockers were set to play the Nets. There was only one problem. He and Rowdy Rebel showed up to the game and were repping the new team in town. Shmurda ditched his roots, and the hat that he found only a few hours earlier, for the clout. Sad.

Bobby Shmurda tossed his Knicks hat, went to jail, and came out a Nets fan pic.twitter.com/A9EMXn4C7X

The game went back-and-forth down to the final seconds and the Knicks were ultimately screwed on a tough no-call that resulted in Brooklyn’s 13th win in 14 games. After the final whistle, Shmurda doubled-down on his new affiliation and showed off the game-worn jersey that James Harden gave him.

Shout out to the Bro @JHarden13 for the game winning Jersey. pic.twitter.com/qckeLUOkql

I’m devastated. As a lifelong Knicks fan, I and my fellow  have repped for Shmurda so hard. We were always at the forefront of the #FreeBobby movement and we were ready to go to war for him after his incidents in prison. Nobody had his back more than the orange and blue. And then he went and flipped on us just like that. I get it. The Nets are the cool team and they’re in Shmurda’s childhood backyard. It would make sense if he started there, but the Nets were in New Jersey and his fame went hand-in-hand with his Knicks hat. This one hurts, Bobby.