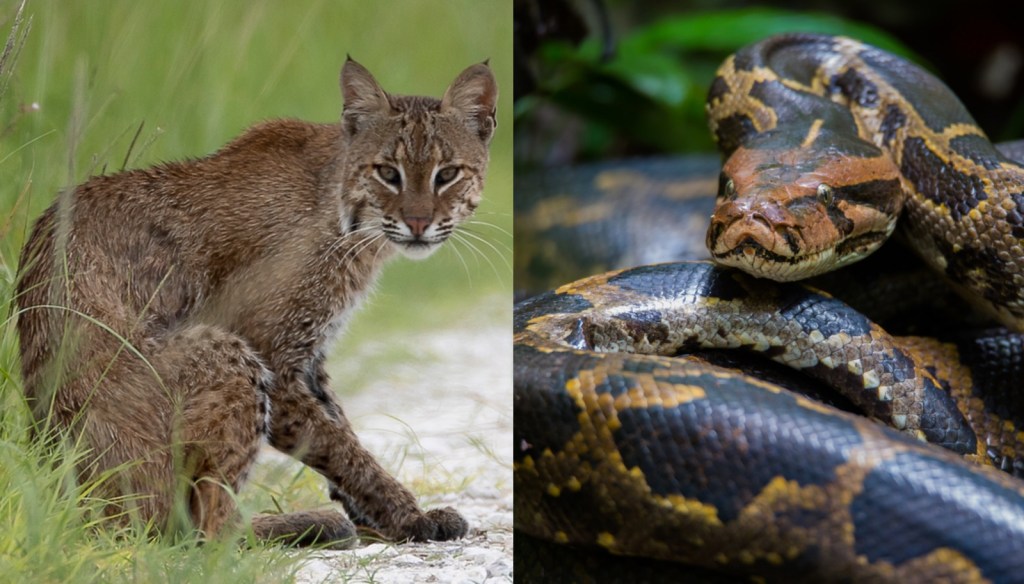 The Florida Everglades / Everglades National Park encompasses 1.5 million acres of wetlands. And it is home to famous and rare species like the Florida panther, saltwater crocodiles, and in recent decades Burmese pythons. Visitors to the Glades can take tours to try and spot these creatures or they can watch videos like the one below from the comfort of their homes.

Calling the invasive Burmese pythons ‘rare’ at this point almost doesn’t seem fair because they’ve flourished in the Everglades as the species is perfectly suited to life in the swamp. They are nearly impossible to spot in areas of dense wetland. The best chance at spotting Burmese pythons in The Everglades is looking for them on roads when these reptiles come out to sun themselves and leach warmth on the asphalt streets.

The camouflage on these snakes being so effective in the Florida Everglades has been a huge boon in the species’ proliferation in recent years. That, and the fact that they don’t have a TON of predators because the Burmese Python is the biggest snake species on the planet. They can weigh up to 200 pounds and grow 26-feet in length.

In this clip, we see an adult bobcat tangling with a 150-pound Burmese Python. Just stop and let that sink in for a moment, a 150-pound snake is out there living its best life in South Florida and the only reason we know about it is because of this trail camera. I can’t help but think about how many 150+ pound snakes are out there that we don’t know about…

Bobcat And Burmese Python Battling It Out In The Everglades

This footage is from a wildlife trail camera that captured video from June, 01 to September, 09 of last year. It has been edited to show the good stuff. The clip begins with the adult bobcat (Lynx rufus) discovering a Burmese Python nest full of eggs and then moves to the bobcat and snake battling it out around the 3:46 mark. Check it out..

I can’t imagine there have been too many encounters throughout history between bobcats and Burmese Pythons but those dustups will likely grow frequent in the future as the snakes continue to flourish in Florida.

A single Burmese Python, which are non-native to Florida, can lay anywhere from 50 to 100 eggs at a time. Since 2000, over 13,000 of these invasive snakes have been removed from The Florida Everglades but there’s no telling how many more are out there. And the average lifespan of a wild Burmese Python is 20 to 25 years. The numbers are certainly stacked against bobcats in their battle against snakes.

What Do Bobcats Normally Eat?

Bobcats love eating squirrels. Squirrels to bobcats are like ribeye steaks to dudes. They also eat birds, rabbits, rats, and other small mammals. They are vital to population control in their ecosystems.

Coyotes, raccoons, and bobcats have all been known to eat turkey eggs but I cannot find any evidence of bobcats targeting snake eggs as a meal like in the video above. That’s part of what makes that video above of the fight between the bobcat and Burmese python so special.

Bobcats vs Burmese Pythons in Florida

Seven researchers co-authored a study published in the journal Ecology and Evolution back in February about the video you saw above. It is titled ‘Face-off: Novel depredation and nest defense behaviors between an invasive and a native predator in the Greater Everglades Ecosystem, Florida, USA’.

The abstract from that published study says this is the “first documentation of any animal in Florida preying on python eggs, and the first evidence or description of such antagonistic interactions at a python nest.” The keyword here is ‘documentation’ because it’s almost certainly happened before, it just hasn’t been caught on camera until now.

Are Bobcats Enough To Stop These Burmese Pythons From Proliferating?

Nope. Definitely not. An adult Burmese Python can lay 50 to 100 eggs at a time. In order to slow the spread of these invasive snakes, there needs to be a LOT more species eating the eggs.

That, and we need the Florida Python Challenge to grow in popularity every year. It is an annual event in Florida where people compete to catch the biggest and most Burmese pythons with the winner taking home ten thousand dollars.

To learn more about how you can participate in the 2022 Florida Python Challenge and help to remove invasive Burmese Pythons you can click here to learn more.