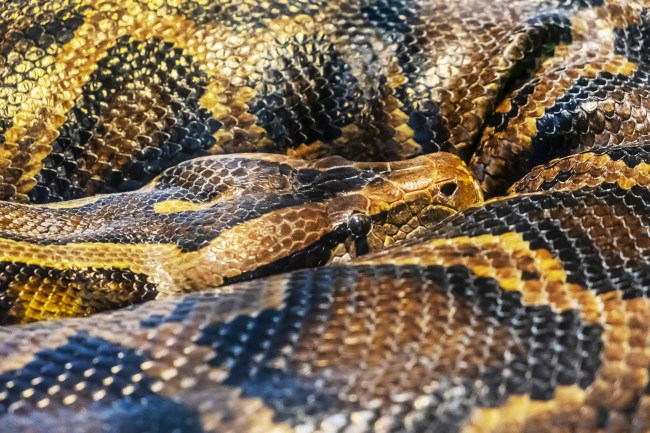 It has been about a year since an 18-foot Burmese python caught in Florida set a new state record as the largest snake caught in Florida and now we have a bigger, badder snake in the record books. This isn’t surprising but it is concerning because every year these invasive pythons grow larger and they’re so good at camouflaging in Florida that they’re nearly impossible to find.

Many people think the Green Anaconda is the largest snake in the world because it has such a formidable reputation. The anaconda was forever cemented in pop culture back in 1997 when Owen Wilson, Jon Voight, Ice Cube, and Jennifer Lopez starred in Anaconda, a film about a quest to capture the world’s largest snake. ‘Largest’ is the operative word here because the Green Anaconda found throughout Brazil and South America is the heaviest but Reticulated Python is often considered the ‘largest’ because it is the longest aaaaaaand then there’s the Burmese Python which is in the discussion as well.

The Burmese Python is the invasive species of snake that’s thriving throughout the Florida Everglades where the swampland is so dense experts find it nearly impossible to track these snakes unless they find them sunning themselves on warm cement roads, or send cameras into snake holes by attaching the cameras to turtles or rabbits.

The Python Action Team is operated by the Florida Fish and Wildlife Conservation Commission which also regulates fishing and hunting. They are just one moving arm of the effort to eradicate as many of these invasive snakes from Florida as possible before these snakes take over the Florida Everglades. They just shared photographs of this new state record Burmese Python which measured an insanely long 18-feet-9-inches and weighed 104-pounds.

Record-breaker! 🐍 Members of our Python Action Team and the South Florida Water Management District Python Elimination Program captured an 18 foot, 9 inch Burmese python. That’s a new record! Ryan Ausburn and Kevin Pavlidis caught the behemoth of a snake weighing a whopping 104 pounds. The removal of this female snake is a triumph for our native wildlife and habitats and a great example of the partnership between our two programs working toward our goal of removing nonnative pythons. Find out more about the Python Action Team online at MyFWC.com/Python . Thanks to Governor Ron DeSantis for all of his leadership on this important issue. 📸 courtesy of @sfwmd_gov #invasive #nonnative #snake #BurmesePython #python #Everglades #SFWMD #PythonActionTeam #Florida

This new state record was caught just 35 miles west of Miami on the L-28 Tieback Canal by Ryan Ausburn and Kevin Pavlidis who work with the FWC and South Florida Water Management District.

The previous largest-ever snaked caught by Florida’s Python Action Team wasn’t the official state record (this new one is) but this 18’4″ python the P.A.T. caught last year October is an absolute behemoth as well:

This huge 18’ 4” invasive python is the largest ever captured by our Python Action Team! Not only did we reach the impressive milestone of removing more than 900 invasive Burmese pythons from the Everglades, but Cynthia Downer and Jonathan Lopez brought in this 98 pound, 10 ounce snake from the Big Cypress National Preserve! This snake is the largest captured by our Team, and second longest python ever removed in the state. Find more through the link in our bio or google @MyFWC Facebook. Thanks to our Governor and partners! Governor DeSantis and South Florida Water Management District as well as the National Park Service. #Everglades #GovDeSantis #SFWMD #NPS #Snake #Python #BurmesePython #Invasive #nonnative #outside #lake #outdoors #PAT #PythonActionTeam #Picoftheday #Photooftheday

There’s really no telling of how many Burmese Pythons are loose in Florida. Some estimates think there are hundreds of thousands in the wild. There was an experiment a few years back where they created a realistic Everglades-type setting with a bunch of snakes hidden in the simulation and experts were only able to find like 1/20th of the snakes hiding in there.

Really, the only way to reliably capture these snakes is when the weather is right and they leave the swamp for the warmth of concrete roads and they’re easy to spot out in the open because if they’re back in the swamp their camouflage is nearly perfect.

I went fishing down in the Everglades about two months ago with Capt. Jimmy of Everglades Fishing Co. (who I highly recommend to everyone) and we didn’t spot any pythons back in the mangrove tunnels but we did come across some other cool snakes perched on branches looking for an easy meal. And if you’re not following the ‘Python Hunter’ on Instagram you 100% need to check him out for a look at what the python situation is like down in the Everglades National Park.