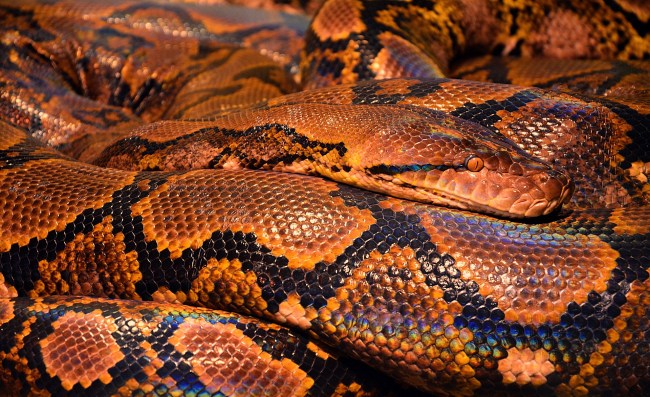 UPDATED with the full video below

Mike Kimmel, aka the ‘Python Cowboy’, has grown a massive following on social media as people watch him catch invasive pythons proliferating throughout The Florida Everglades. Coincidentally, I was down in Everglades City last Saturday fishing with Everglades Fishing Co. and we ran into a few snakes in the mangrove tunnels. Capt. Jimmy was also telling me how the Python Cowboy was down there but I didn’t really think much about it until I came across this clip this morning. One was so close we could barely pass without knocking it off a branch.

Kimmel is a Florida state-contracted python hunter who gets paid for the removal of these invasive snakes. They get paid a base rate ($8.25/hour) and then there are bonuses for the size of a snake. Pythons over 4-feet are $50 and they get paid an additional $25for every foot over 4-feet. Soooooo yeah, this 17-foot python snake was worth a pretty penny.

He caught this 150-pound snake that measured 17-feet and shared the story on his Instagram along with some footage of a gnarly bite. There was so much blood he believed the snake must’ve hit an artery when it bit him.

He’ll be releasing a full video on his YouTube channel tomorrow but shared his story and some pics + video clip on Instagram already. He said he was on a solo trip in The Everglades in his 14-foot Jon Boat and found this snake at 11am. He walked alongside the snake to try and get a feel for how long the snake actually was and could instantly tell she was a behemoth. Here’s a portion of his story from Instagram (shout out For The Win for sharing this):

Her being tangled in vegetation makes the capture that much more difficult, a snake this size will use the vegetation as leverage and can literally pull you into the swamp, no stopping 150lbs of SOLID muscle. I knew going for her head first would be the easiest and safest capture method but I couldn’t turn down the chance to grab her by the tail and dance with the devil herself! As soon as I grabbed ahold of her I sealed my fate lol… no turning back now, she was coming for me!

She immediately started to battle it out, taking strikes and pulling me into some tall grass with her, making it difficult to dodge her strikes… she was able to successfully get a bite on me. Only got me once but that’s all it took… I was punctured quite deep on my bicep and forearm, piercing an artery and hitting some nerves, I was lucky she didn’t latch on and that I was able to pull out of it. After loosing about a gallon of blood, lol, I was able to tire her out and get her under control. I then used a snake bag I had on my waist to tourniquet my arm because I was getting worried about how much blood I was loosing, better safe then sorry. I then had to drag all 150lbs of her alive, working to control my breathing so I didn’t pass out from blood loss and the extreme heat that day, I would have been screwed.

He says he’ll be releasing a full video of the catch on his Python Cowboy YouTube CHannel this Friday so stay tuned for that. I’ll update this article tomorrow with that video once it’s published.

In the meantime, here’s his video on how he won the 2020 Python Bowl in The Everglades.

If you’ve never been down to the Florida Everglades for fishing I cannot suggest it enough. It’s like stepping into another world back in the mangrove tunnels. The National Park is so protected that you catch a glimpse of what the wildlife in Florida would’ve looked like hundreds of years ago. And I’d definitely suggest going out fishing with my dude Capt. Jimmy at Everglades Fishing Co. Just follow that link for info on his fishing charters or Eco Tours if that’s what you’re into.