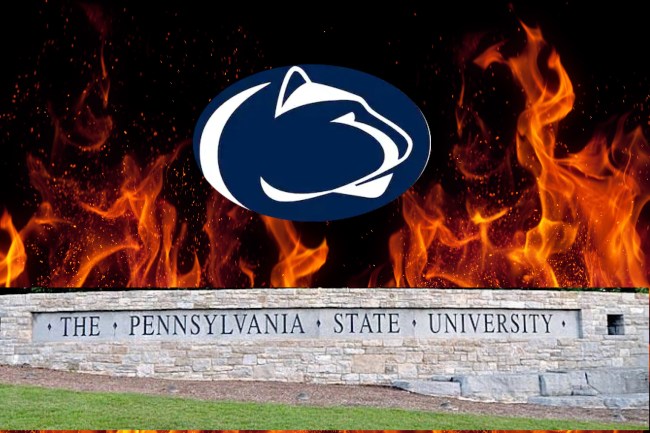 File this one under: Shit Everyone Saw Coming.

Less than 48 hours after Penn State freshmen moved into their University Park dorms to embark on a four-year drunken vacation, the university is already issuing Official Statements. This is extra impressive when you consider it took the school 15 years to address Sandusky stalking the showers.

Drunk off cheap liquor and the promise of undeserved sex, droves of Penn State newbies cascaded across the East Halls to engage in what us old timers call a proper brouhaha.

penn state should’ve made all freshmen do classes remotely this semester idc pic.twitter.com/KKz06E2gfn

Nothing says, I Come From A Repressed Mormon Household like an introductory twerk-off smack dab in the center of campus.

“Live in the moment” my ass. Penn State won’t survive more than a week.

This is unbelievable. The fact that people had the nerve to do this, Especially after multiple schools closed, just wrong on so many levels.

I hope you had fun at your party pic.twitter.com/ZsYLJ73uMg

(Pro Tip for the Youngsters: Never be the guy to join the female-on-female twerk off. Recognize that the only thing being That Guy says about you is that you went to prom solo.)

“I ask students flaunting the university’s health and safety expectations a simple question: Do you want to be the person responsible for sending everyone home?” Barron said Thursday in a statement.

“This behavior cannot and will not be tolerated. We have said from the beginning health and safety is our priority, and if the University needs to pivot to fully remote instruction we will.”

Hey Eric, when you’re done dealing with hundreds of unruly children taking a metaphorical dump on your authority, you may want to attend to the GATDAMN BOMB THREAT.

Penn State has reported a credible bomb threat to campushttps://t.co/4mNlQ3KZij

At approximately 9:45 a.m. on Thursday, a credible bomb threat was received via call to the Penn State Police dispatch center.

Authorities are currently investigating what could be a suspicious package delivered to an unknown location with explosive detection canines.

Out of precaution, the Hostetter Services Building on Services Road, which houses a campus mail center, has been evacuated.

People have since been allowed back in the building after the threat turned out to be a fluke.

Have a day, Penn State. Have a fucking day.

Penn State is having itself a DAY pic.twitter.com/oSf7aLjQkd