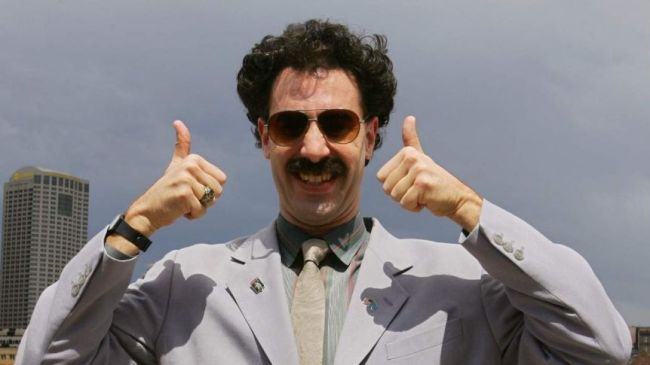 I’m tellin’ ya: Sasha Baron Cohen has got something up his sleeve. As I laid out in my Borat article yesterday, there’s a handful of factors that suggest that the sequel will contain *something* that creates headlines.

Why? It’s simple, really. First, there’s the direct reference to the Republican party, as Vice President Mike Pence’s name is literally in the title. Then, of course, there’s Baron Cohen’s history of targeting conservative figures, as he did in the Showtime series Who Is America?. Combine that with the apparent urgency to get this film released before Election Day and the below teaser trailer that takes direct aim at President Trump, and there’s a very real chance that the 14-year-later follow-up to Borat contains something that’ll create news right before Americans head to the polls.

Congratulation to great friend of the Kazakh people @realDonaldTrump for winning debate today! Impressive and amazing result for a strong premier who always put America and Kazakhstan first! pic.twitter.com/qLljQ8b5UU

What makes this iteration of Borat so fascinating is that the character is now a cultural figure and a known quantity, which was absolutely not the case the first time around, so it’ll be interesting to see how exactly Baron Cohen is able to pull off these pranks despite being infinitely more recognizable than he was in the first film. However he did it, it certainly wasn’t easy, as Deadline reports that some scenes were so risky to shoot that the 48-year-old Englishman was forced to wear a bulletproof vest.

Regardless, whatever it is Baron Cohen cooked up, I can’t wait to see it in all of its chaotic glory. And if you’re someone who just remembered that super weird interaction you had with that Kazakhstani journalist over the summer, I’d start sweatin’ if I were you.