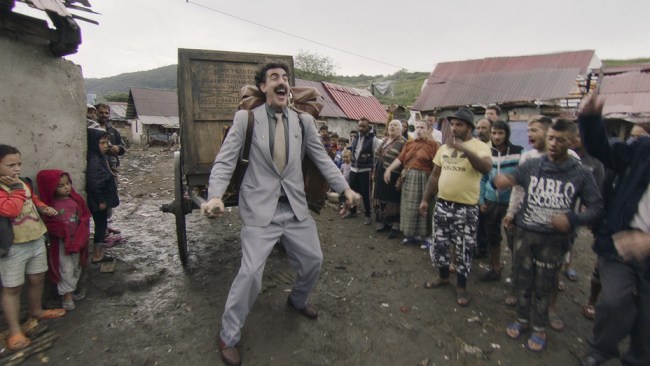 When I told the rest of the BroBible Slack channel that I’d just finished my Borat Subsequent Moviefilm screener, the first question I was asked what whether or not it’s as funny as the original.

That’s a more difficult question to answer than you think, as much of our senses of humor have to do with how old we are and where we are in our lives. As I detailed in my Top 10 Comedies on the Early 2000s article, I discussed this very phenomenon when writing about The 40-Year-Old Virgin and how the perspective of the humor changes as you age.

“As a result, my pre-teen friends and I were the perfect audience for this film, as we paradoxically existed in the same headspace as the titular virgin, despite being an entire generation apart. Now, as I find myself smack in the middle between Andy’s age and the age I was when I first saw the movie, although my perspective on the jokes and the film’s general humor has changed, its effectiveness has not. While I may be laughing at ‘The 40-Year-Old Virgin’ for different reasons — now, instead of looking at Andy’s plight through the lens of a 13-year-old virgin, it’s from the point of view of a 27-year-old man with a decade-plus of sexual activity — I’m still laughing all the same.”

The original Borat came out just one year after The 40-Year-Old Virgin, once again placing me in the midst of my teenage years, thus, again, making my friends and I the perfect audience for the 2006 satire. And that makes it difficult to compare and contrast the hilarity of the two, as I recall multiple Friday night with the boys, staying up all night, laughing until we cried at the kidnapping of Pamela Anderson.

Just as I’ve matured, though, so has Sacha Baron Cohen, and it’s obvious in the content of Borat Subsequent Moviefilm. Whereas the original Borat was raising hell for raising hell’s sake, its sequel possesses a sense of both urgency and duty that was simply not present 14 years ago. Back then, Baron Cohen was using Borat to target the stupid among us. Now, he’s just going after the worst of us and he’s doing it on purpose.  While many of the jokes are constructed the same and are as hilarious as ever, the context in which they’re viewed has changed as the blatant ignorance of Borat’s targets becomes far less funny when you realize these people actually exist in this way outside of the 90-minute sequel. From a disturbing debutante ball in Georgia to living with conspiracy theorists for five straight days, Borat’s tactics may be the same but his victims are far from it, as this time around, there’s a sense that these people are getting what they deserve.

Speaking of getting what they deserve, we’d be remiss if we didn’t mention the already infamous Rudy Giuliani scene, which I’ll describe as certainly not illegal but wholly slimy no matter how you slice it. While I don’t think this sort of behavior is unique to Giuliani or high-profile politicians, how easily he was able to be duped into such a situation tells you all you need to know, especially given the sheer absurdity of the characters used to penetrate the inner circle of the President’s lawyer.

Regardless of political affiliations, Borat Subsequent Moviefilm is likely one of the funniest movies of the year, as it contains a handful of legitimate laugh-out-loud scenes that are, naturally, counterbalanced by their inherent cringeworthiness, simultaneously making the funniest scenes in the film also the most difficult to watch. But, after all, that’s Borat at his finest.