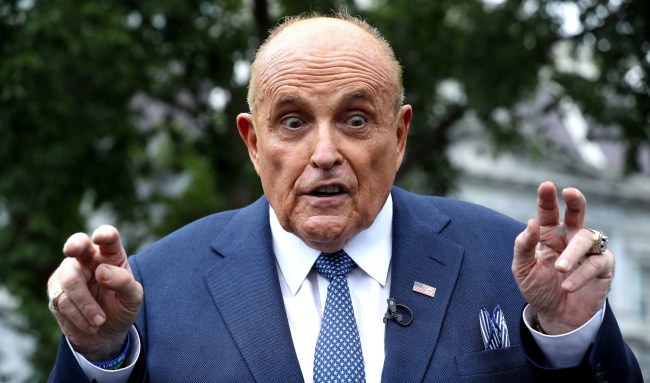 The director of the Borat sequel, Jason Woliner, spoke this week with The Daily Beast’s Last Laugh podcast and shared what really went down during that infamous scene involving Rudy Guiliani and actress Maria Bakalova in the hotel.

It turns out that Sacha Baron Cohen and Bakalova weren’t the only ones who had to be in disguise for that interview with the former mayor of New York City. Woliner also found himself going so far as to bleach his hair to land a meeting with Guiliani.

Woliner also explained what was happening behind the scenes as they were shooting the Guiliani scene for Borat Subsequent Moviefilm.

“Well, I was watching it as it was going,” said Woliner. “I was in a control room kind of hidden right there. And Sacha was hidden in a cubby that we had built into a little closet and he and I were texting because he couldn’t see what was going on. And so I was watching the feed. There were hidden cameras, obviously. So we’re unable to communicate with Maria, but we’re just trying to text with Sacha to determine when is the right time to jump out.”

As the interview progressed and things started to get even more… uncomfortable, Woliner had to make a determination when to put a halt to it.

“…at a certain point it’s not funny anymore. It’s just a sting operation,” he said. “So we’re texting with him, we’re watching. So they’re doing this interview. He’s saying all these shocking things about COVID and all this racist stuff about Chinese people. And then we have the first beat of it when Sacha comes in as the boom guy and that’s step one. There’s a chance, step one, he sees Sacha in what I think is the most absurd costume of the movie — it could blow up. Rudy could be like, what the f–k is that? And it doesn’t. If we just got that, we could maybe put something together. We didn’t want to just get that, but every step of the way is like, OK, let’s try it again. There was actually a beat that we shot where we pushed in a room-service tray and Sacha was hiding underneath it. We were doing this kind of farcical thing where he’s trying to communicate with her again and we wound up cutting it out of the movie. Again, Rudy didn’t discover anything weird, his radar didn’t go up.”

Related: ‘Borat 2’ Star Maria Bakalova Shares Her Side Of The Rudy Giuliani Story

As for the moment in the scene that caused all of the controversy, Woliner was thinking what just about everybody was thinking.

“…the interview winds down and they go into the bedroom. And of course there are no visible cameras in the bedroom,” Woliner explained. “And then it’s really as you see it. He’s touching her shoulder, he’s asking for her number. He sits on the bed, he touches her lower back. And every moment of that we were watching thinking, ‘Oh my God, oh my God, oh my God.’

“…imagine watching that in real life, a few feet away. And then he lies down and he puts his hand down his pants. My jaw hit the floor. It was one of those moments you never forget. And that’s when we said, ‘OK, Sacha, I think it’s time to go in now.'”

Guiliani later tried to explain that he was just tucking in his shirt after removing the microphone, but Woliner wasn’t buying it.

“You know, I’ve been doing this for a long time. I’ve seen a lot of people get microphones applied and removed. I’ve never seen anyone have to lie on a bed and put their hands down their pants.”