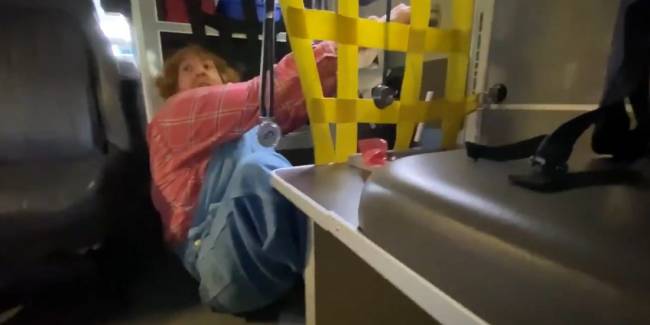 If you still haven’t seen Borat Subsequent Moviefilm, honestly, what are you doing? Even if you don’t like Borat or Sacha Baron Cohen — which I’d totally understand — this is one of those films that’s less of a movie and more of an experience, sort of like the original Paranormal Activity. It’s something that you need to see so you can participate in the conversation that surrounds it, especially when it comes to some of the film’s bigger moments, like the debutante ball scene or the Rudy Giuliani scene.

Take the right-wing gun rally scene, for example:  Baron Cohen obviously knew he was entering himself into a precarious situation, as the comedian recently revealed that he was wearing a bulletproof vest while filming the gun rally scene, saying he felt he was “lucky” to get out of their alive. Based on this recently released footage, Baron Cohen’s fears were certainly legitimate.

RELATED: The Process Maria Bakalova Went Through To Land The ‘Borat 2’ Role Was Insane

This was not the easiest movie to make. #BoratSubsequentMoviefilm pic.twitter.com/oagfJoGjNt

Even if you don’t appreciate Baron Cohen’s brand of humor, you certainly have to respect it, as this man is literally burrowing himself behind enemy lines with the sole purpose of getting under their skin. And in this case, the people he found himself irritating were hundreds of rabid gun-owners, which only serves to up the ante and the intensity.

Borat Subsequent Moviefilm: Delivery of Prodigious Bribe to American Regime for Make Benefit Once Glorious Nation of Kazakhstan — easily one of the year’s funniest films — is currently streaming on Amazon Prime Video.