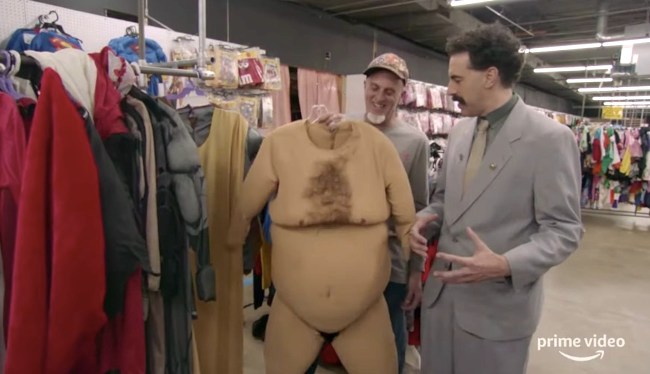 Of all the entertainment news stories to break this fall, the announcement of the Borat sequel was easily one of the most shocking, as fans went from not even knowing it existed to being presented with a fully-produced and ready-to-be-released film.

Not only did The Borat Subsequent Moviefilm: Delivery of Prodigious Bribe to American Regime for Make Benefit Once Glorious Nation of Kazakhstan (yes, that’s the actual title) come out of nowhere, but it was filmed in secret in the midst of a historical pandemic, making the feat all the more impressive.

If that doesn’t prove to you how committed Sasha Baron Cohen was to making this movie and having it ready for release before Election Day, then maybe this incredible anecdote about him fearing for his life while filming will.

“While filming my latest Borat film, I showed up as a right-wing singer at a gun-rights rally in Washington State. When organizers finally stormed the stage, I rushed to a nearby get-away vehicle. An angry crowd blocked our way and started pounding on the vehicle with their fists.”

“Under my overalls, I was wearing a bulletproof vest, but it felt inadequate with some people outside toting semiautomatic weapons. When someone ripped open the door to drag me out, I used my entire body weight to pull the door back shut until our vehicle maneuvered free. I was fortunate to make it out in one piece. The next few weeks will determine whether America will be so lucky.” [via Time]

Love him or hate him, you have to admit that Sasha Baron Cohen is certainly committed to his craft.

The Borat Subsequent Moviefilm: Delivery of Prodigious Bribe to American Regime for Make Benefit Once Glorious Nation of Kazakhstan will hit Amazon Prime Video on Friday, October 23 — just a little more than a week before Election Day on November 3.