‘Borat’ Has Achieved An Oscars Feat Previously Accomplished By ‘The Godfather’ 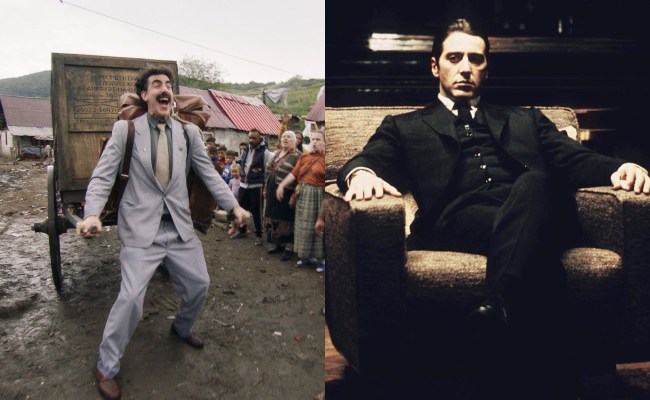 This is the world we live in now, so get used to it. We live in a world where sentences and facts like this, things that should make absolutely no sense, oddly do because of just how upside-down our world is. Sort of like Joker’s speech from The Dark Knight, only backward. You see, back in 2008, the Clown Prince of Crime pointed out that the masses remain calm as long as things go according to plan. A “truck of soldiers being blown up”? Par for the course. The death of “one, little old Mayor”? And everyone loses their minds. In 2021, that’s been flipped. If you told me aliens had touched down in Paris, I wouldn’t bat an eyelash. “Well, I mean… it’s 2021. OF COURSE aliens have arrived,” I’d reason.

The same can be said about the Borat franchise achieving an Academy Awards feat that was previously only accomplished by The Godfather, widely considered to be the greatest piece of pop culture in American history. In a regular year — in years past — I’d be stunned. But in 2021? Literally nothing can phase me, aliens, Academy Award nominations, or otherwise.

As pointed out by Twitter user RussellHFilm, following the Best Adapted Screenplay nomination for Borat Subsequent Moviefilm, the Borat franchise became the only franchise other than The Godfather to have its first two films nominated in the Best Screenplay category.

THE GODFATHER was the first movie franchise to have its first and second films both nominated for Best Screenplay. the second movie franchise? BORAT.

Unfortunately, though, it turns out that Russell H Film’s tweet was *technically* accurate, as (500) Days of Summer screenwriter Michael Weber aptly pointed out that The Thin Man (1934) and its sequel After The Thin Man (1936) scored Screenplay nominations. Still, given that these movies were released before the dawn of World War II, we’ll let Mr. R.H. Film slide on this one. Maybe we’ll just amend the achievement to being the first “modern” film to replicate The Godfather’s accolades. Borat deserves it.

The 93rd Academy Awards will take place on Sunday, April 25, at 8 p.m. EST. We’ll be covering the ceremony in-full over on the Post-Credit Podcast, so make sure to subscribe and check that out.