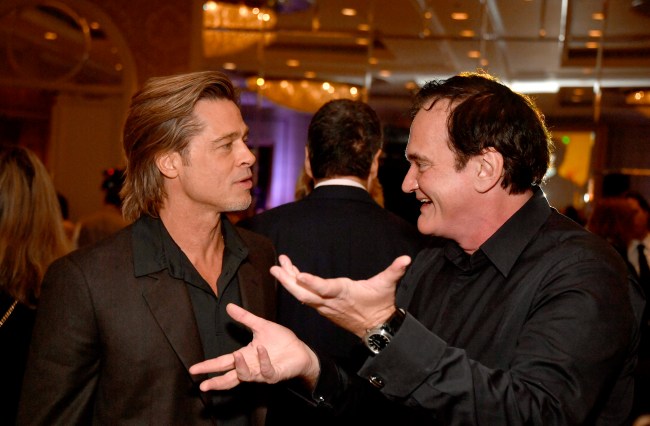 It’s difficult to imagine a world in which Quentin Tarantino isn’t waking up every morning and snorting alligator tails off his coffee table before getting to work. That seems to me to be the most plausible explanation for his uptempo cadence and the fact that he hand-writes every script he’s ever written (“I can’t write poetry on a computer, man!“)

But typing “Does Quentin Tarantino do cocaine?” into Google only results in Reddit threads basically speculating that a dude who perpetually sounds like he’s got two fingers up his ass must dabble in that booger sugar.

I want to know the exact numerical value of the amount of cocaine Tarantino had in grams before shooting this pic.twitter.com/nhLq0aqjll

Welp. That answers that.

Brad Pitt reinforced this narrative on Tuesday while presenting the Once Upon a Time in Hollywood director with the best screenplay trophy at the New York Film Critics Circle Awards, even if it was said in jest.

In front of a room full of uppity Hollywood elites, Pitt referred to the movie as showcasing “iambic Quent-ameter” before taking a playful shot at the legendary filmmaker: [Tarantino is] very verbose. He’s the only guy I know who needs cocaine to stop talking.”

The comment left the room “puzzled,” according to Fox News.

Pitt also joked about the topic of Tarantino’s ninth film, saying: “Finally, after all that time, a film about Hollywood.”

He also jabbed himself, admitting that whenever he tries to be “actory” and add a clever comment to a Tarantino script, it “always f–ks it up.”

Pitt’s loosey goosey mentality has been very entertaining this week. During his recent appearance on Marc Maron’s “WTF” podcast, the 56-year-old summed up his Hollywood existence as “trash mag fodder” fueled by his “disaster of a personal life probably, most likely.”

But enough with that. Anyone got the number to QT’s coke guy? HELP ME OUT, MAAAAN!