Bradley Cooper Says He Made ‘A Star Is Born’ Because He Thought He Was Good At Air Guitar, Tested His Theory On ‘The Tonight Show’ 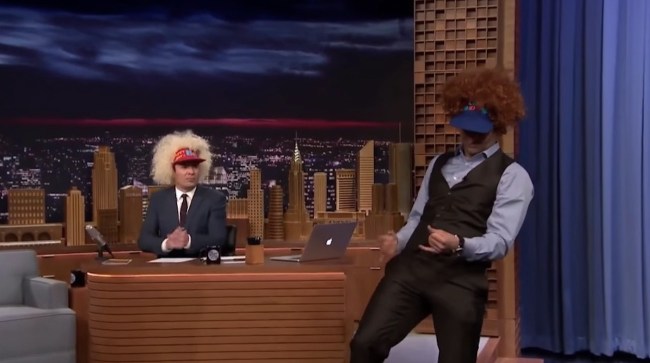 As if Bradley Cooper wasn’t already aggressively handsome and talented enough, the nine-time Oscar nominee unleashed even more of his talents on the unsuspecting pop culture world back in 2018 when he decided to direct and star in A Star Is Born.

Not only did Cooper helm the Best Picture-nominated film and score a Best Actor nomination for his performance, but he also played guitar and sang in the movie to wildly convincing effect.

During a recent interview on the Smartless podcast, Cooper said that he decided to take on the behemoth task of making A Star Is Born because he, quite simply, thought that he was good at air guitar. Perhaps even more hilariously, he said he used The Tonight Show to test whether or not he could play a rockstar.

“I always deep down thought, ‘Maybe I could play a rockstar.’ Only because I thought I could crush air guitar,” Cooper told Jason Bateman, Will Arnett, and Sean Hayes on the Smartless podcast (around the 52 minute mark).

“I went on Jimmy Fallon and I asked ‘Can I do an air guitar?’ Just to see if I believed it. I’m not kidding. So I went on The Tonight Show and I asked ‘Could I do Down by the River?’ by Neil Young. And I did it. And I looked at it and thought ‘Ah, yeah, I think I buy that. Okay, I’ll do A Star Is Born!'”

Cooper’s appearance on Smartless wasn’t all fun and games, though, as the 47-year-old told an incredibly emotional story of how Arnett helped him realize that he had a problem with drugs and alcohol.

Almost four years after the release of A Star Is Born, Cooper is now gearing up production on his second feature film, Maestro, which sees him star as legendary American composer Leonard Bernstein alongside Carey Mulligan, Jeremy Strong, Matt Bomer, Maya Hawke, and Sarah Silverman.

RELATED: Bradley Cooper Credits Will Arnett With Making Him Realize He Had Addiction Issues In Incredibly Emotional Recounting Of Their Friendship