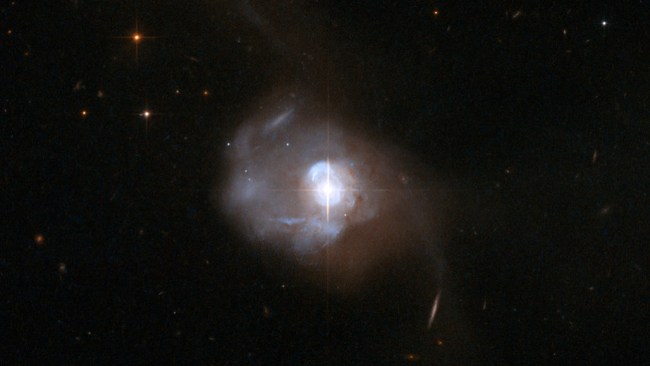 For the first time in history, scientists have found breathable oxygen outside of the Milky Way. Let’s go!

Astronomers have discovered molecular oxygen, which is the same gas humans need to breathe, in a galaxy outside the Milky Way. The breathable oxygen was found in a galaxy named Markarian 231, which is about 560 million light-years away from Earth. Markarian 231, which is in the constellation Ursa Major, is the closest galaxy to us that has a quasar. A quasar is the brightest celestial body in the universe that has an active galactic nucleus (AGN) powered by a supermassive black hole that can emit up to a thousand times the energy output of the Milky Way.

Molecular oxygen (O2) is the breathable version of the gas and necessary for life on Earth. Oxygen is the third most abundant element in the cosmos, behind hydrogen and helium. However, scientists have not been able to detect molecular oxygen elsewhere in the universe. Until now.

Junzhi Wang, an astronomer at Shanghai Astronomical Observatory in China, and his colleagues have said that they found breathable oxygen in the Markarian 231 galaxy. On January 30, 2020, Wang and his team issued the report titled “Molecular Oxygen in the Nearest QSO Mrk 231” in The Astrophysical Journal. Could this be where all the UFOs were seeing are coming from?

The team of researchers declared that they had found the “first detection of extragalactic molecular oxygen” found outside the Milky Way. The scientists utilized spectroscopy to find the oxygen molecules. Spectroscopy is the study of the interaction between matter and electromagnetic radiation, and they are able to look for specific molecules by the wavelengths.

RELATED: Closest Mysterious Repeating Radio Signals Ever Discovered Coming From Spiral Galaxy Much Like Ours

Using ground-based radio telescopes and observatories, such as the IRAM 30-meter telescope in Spain and the NOEMA interferometer in France, they were able to detect molecular oxygen in the Markarian 231 galaxy. The astronomers found that Markarian 231’s radiation was at a wavelength of 2.52 millimeters, and believe it is equal to the oxygen on Earth and is the highest amount of oxygen outside of our planet.

The paper said the oxygen could “be caused by the interaction between the active galactic nucleus-driven molecular outflow and the outer disc molecular clouds.”

“O2 may be a significant coolant for molecular gas in such regions affected by AGN-driven outflows,” the researchers noted. “New astrochemical models are needed to explain the implied high molecular oxygen abundance in such regions several kiloparsecs away from the center of galaxies.”

RELATED: Physicists Claim To Have Discovered Fifth Force Of Nature That Could Explain The Mystery Of Dark Matter

However, the molecular oxygen might not have the right mix of other elements needed for breathable air. Our oxygen is mixed with nitrogen, carbon dioxide, methane, and other molecules that we need to breathe. That would suck to travel 560 million light-years only to find that the oxygen wasn’t really breathable.

Scientists have found breathable oxygen in the Milky Way besides Earth in two different places that are forming stars. Satellites detected molecular oxygen in the Rho Ophiuchi cloud, which is 350 light-years away from Earth, and the Orion Nebula, which is 1,344 light-years away. These are both the birthplaces to young stars, which could be evaporating water ice and releasing it as oxygen.

The team believes that Markarian 231 has 100 times more oxygen compared to hydrogen found in the Orion Nebula. Markarian 231, which was first discovered in 1969, is a very active galaxy, pumping out new stars at a rate of more than 100 masses per year.

So it looks like we have a place to go when Earth’s air is full of coronavirus.

Reminder, if there are aliens in the Markarian 231 galaxy holding all of the oxygen, you can try to unlock the air shield with the combination: 1, 2, 3, 4, 5.

RELATED: NASA Says City-Killer Asteroid The Size Of The Great Pyramid Of Giza Will Have A Chance Of Smashing Into Earth In 2022